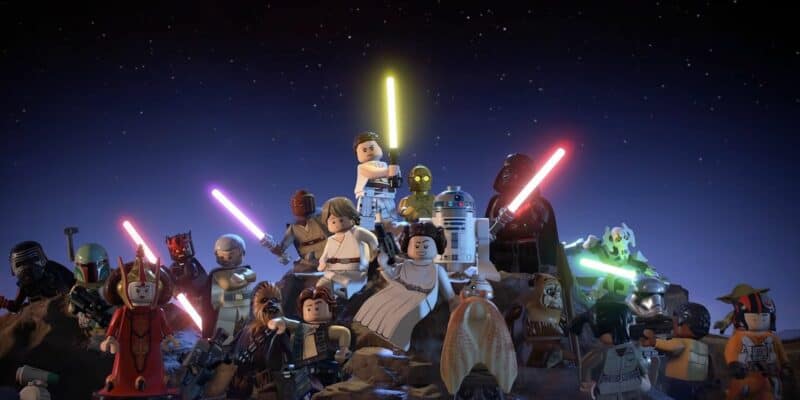 Fans have been praising LEGO Star Wars The Skywalker Saga for the amount of content in the game.

LEGO video games have been around a long time, but the first one came out 17 years ago with LEGO Star Wars: The Video Game (2005). Now fans have been enjoying the newly released game as they can experience the Saga in a new humorous way.

The video game has already broken records by having the most concurrent players than any other game in the LEGO franchise. Benji-Sales pointed out that The Skywalker Saga has blown past the other LEGO games with 62,000 concurrent players:

Lego Star Wars: The Skywalker Saga has CRUSHED the all-time concurrent players record for the Lego franchise on Steam

That’s not all because if you check the Steam charts, you will see that The Skywalker Saga is actually in the top ten most-played videogames at the moment. The game has now reached 82,000 users playing the game at once which is an impressive feat. While the video game won’t be in the top 10 for long, it’s surprising that The Skywalker Saga has such a large amount of players.

Most Single-Player games don’t take long to finish, but The Skywalker Saga breaks the mold for a LEGO game. One of the reasons why this LEGO game will take longer for fans to complete is because the game has decided to focus more on open-world areas to explore and complete side missions rather than create long story missions. Don’t get me wrong, The Skywalker Saga does a fantastic job creating excellent missions with hilarious twists on the Star Wars saga.

Any player can traverse 20 unlockable planets across the nine episodes which means that there is a lot of fun moment waiting for players. This time around, the LEGO game makes sure fans can relive iconic moments of the Star Wars trilogies with all of the funniest jokes and nostalgia.

All the eras of Star Wars provide fun moments as the side missions force players to explore the worlds and find several secrets. Star Wars fans can also play almost any character they want as the game offers over 300 characters to play from. Some of them are just different versions of the same characters, but you can’t convince fans that a Holiday Special C-3PO isn’t the way to go after fans unlock them.

Do you plan to play The Skywalker Saga? Let us know what you think in the comment section below!