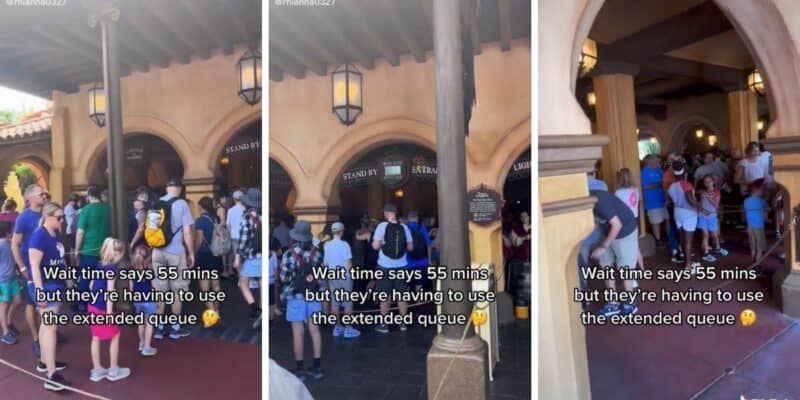 This past weekend, we also saw an increase in crowd levels over at Disneyland Park and Disney California Adventure due to Easter weekend. In fact, because of the holiday crowds, the line for Pirates of the Caribbean extend outside the regular queue and into the land it resonates in.

This past weekend, many families visited Disneyland as it was a holiday weekend. Due to the number of Guests inside the theme parks, the wait times for many attractions were longer than some may have been expecting.

For example, the line for Pirates of the Caribbean had to be extended outside the regular queue area as it took over New Orleans Square. The posted wait time was 55 minutes, but by the looks of the line, many estimated they would wait much longer.

One Guest posted a video of the line to TikTik, which you can see below.

Although the crowds look as though they are at pre-pandemic levels, we have recently confirmed Disney is still not operating at full capacity — and may never do so again.

In 2020, Chairman of Parks, Experiences and Products Josh D’Amaro indicated that the newly implemented Park Pass system is a “new normal” that isn’t going away anytime soon, if ever, so Guests should get accustomed to utilizing the Disney Park Pass system if they are planning a trip to Walt Disney World or Disneyland.

If you are planning on visiting Disneyland, make sure you plan ahead and secure your Park Pass reservation.

Have you visited Disneyland recently or are you planning to? Let us know in the comments below.

If you want to visit Disneyland on your next vacation, let the expert team at Academy Travel help you plan your next magical vacation. You won’t want to miss everything the Parks — Disneyland Park and Disney California Adventure — and the Downtown Disney shopping and dining district has to offer!