"How Dare They?" Marvel Fans Stressed Over Removal of Character From 'Doctor Strange 2' Trailer - Inside the Magic 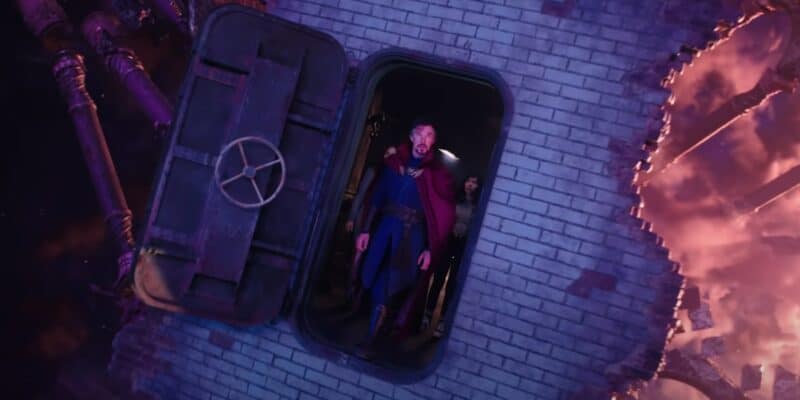 Sometime in the very near future, the Marvel Multiverse will once more be unleashed in the new adventure, Doctor Strange in the Multiverse of Madness (2022).

The sequel to Scott Derrickson’s Doctor Strange (2016) from director Sam Raimi and Michael Waldron looks set to bring the chaos with Benedict Cumberbatch (Dr. Stephen Strange/Doctor Strange) and Elizabeth Olsen (Wanda Maximoff/Scarlet Witch) back wielding sorcery as no Marvel film has done before. Footage of the next movie in Kevin Feige’s Marvel Cinematic Universe has been in abundance, but the Marvel studio is confusing fans after removing one character from the official trailer.

Acting as a follow-up to Tom Holland’s latest Spidey movie, Spider-Man: No Way Home (2021), Doctor Strange in the Multiverse of Madness finds Cumberbatch’s eponymous hero dealing with the aftermath of casting his universe-changing spell. Despite being warned by the current Sorcerer Supreme, Wong (Benedict Wong), Strange proceeded to bring the Multiverse to the onscreen Marvel Universe in a way not seen before.

The notion of the Multiverse was broached in Waldron and Kate Herron’s Loki back in June last year. It was further explored in the canon animated series, What If…?, which truly saw Variants take over the MCU. In the Doctor Strange sequel, the fallout of Strange’s magic for Peter Parker (Holland) is front and center; the Marvel film is poised to bring in the Illuminati, Patrick Stewart but not as Professor Charles Xavier/Professor X, a Tony Stark/Superior Iron Man Variant (possibly with Tom Cruise), and potentially, the debut of the MCU’s Fantastic Four with Reed Richards/Mr. Fantastic.

That’s not all. Several Doctor Strange Variants have been confirmed with Supreme Strange, Zombie Strange, Defender Strange, and Sinister Strange. The latter is seemingly confirmed as the evil Doctor Strange in the feature film. Some merchandise also revealed recently a brand-new character will be joining the movie, which also sees the return of Karl Mordo (Chiwetel Ejiofor) and Dr. Christine Palmer (Rachel McAdams) and the debut of MCU newcomer Xochitl Gomez as America Chavez/Miss America.

But, while fans have seen all of these Marvel Comics characters, including the cinematic debut of Shuma-Gorath/Gargantos, across various trailers and TV spots, it seems that Marvel Studios are still working on the film even a month before release. The most recent TV spot trailer shows that one scene has completely removed a popular character, with fans speculating why they have been edited out.

A tweet from Doctor Strange 2 Updates (@DrStrangeUpdate) shows the differences between shots in the upcoming Doctor Strange in the Multiverse of Madness:

The new #MultiverseOfMadness TV spot has made an update to a previously released shot, omitting a variant Christine Palmer.

The new #MultiverseOfMadness TV spot has made an update to a previously released shot, omitting a variant Christine Palmer. pic.twitter.com/0s7k5kjrdg

The change has come as a shock to fans who are speculating why Marvel Studios have made such a drastic change to the characters involved in this scene. Many comments have poured in, outraged that Marvel is seemingly misdirecting audiences with the removal of Rachel McAdams from this specific scene. Others suggest it adds weight to the character being Clea.

It must be noted that trailers are often released while post-production editing and reshoots are still ongoing. Cumberbatch has been open about the state of the Doctor Strange film, and reshoots are the norm in any film studio, not just Marvel Studios — Kevin Feige has been clear about that.

However, it is interesting that this Doctor Strange in the Multiverse of Madness TV spot has completely omitted Christine Palmer from the sequence. This could mean the outcome for the character is not a good one after the order of events suggest this scene comes after Scarlet Witch unleashes her powers.

Fans only have to wait one more month until all is revealed in the MCU’s 28th Marvel film and the next chapter of Marvel Phase Four. Doctor Strange in the Multiverse of Madness is released on May 6, 2022, exclusively in movie theaters.

Are you excited to discover what happens in Doctor Strange in the Multiverse of Madness?