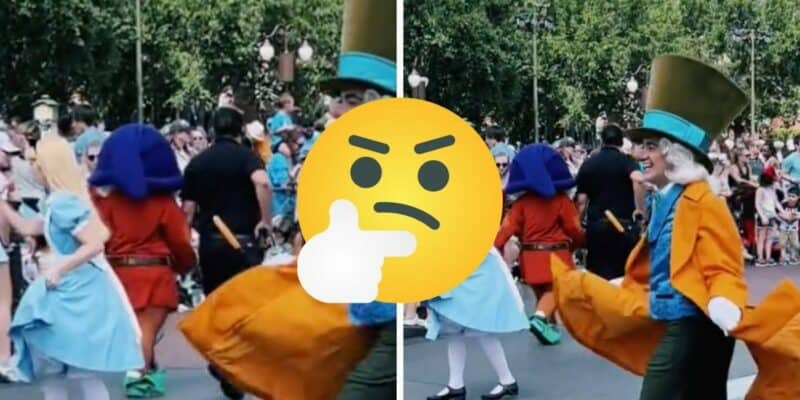 What many refer to as the 3 o’clock parade, Festival of Fantasy is a popular parade that strolls down Main Street, U.S.A. at Magic Kingdom. Featuring iconic Disney characters including Mickey and friends, Snow White, Rapunzel and Flynn Rider, and others, Guests love lining up along Main Street, U.S.A. to catch this parade.

During a recent performance of Festival of Fantasy, Guests were in for a surprise when one of Snow White’s seven dwarves was escorted off of Main Street, U.S.A. mid-parade.

At this time, we are unsure as to what exactly happened as it looks like Grumpy was dancing to the music okay and continuing on with the route, but the Cast Member grabbed Grumpy’s arm and walked him off of Main Street, U.S.A. and out of the Park.

Prior to the ongoing pandemic, Festival of Fantasy showed once per day, normally at 3:00 p.m., which is why many referred to it as the 3 o’clock parade. But once the Parks had to temporarily shut down due to the COVID-19 pandemic, Magic Kingdoms stopped showing Festival of Fantasy to help alleviate crowds.

However, that changed when Festival of Fantasy officially returned to Magic Kingdom on March 9, with not one, but two showtimes!

According to the Walt Disney World website, Festival of Fantasy will show at 11:30 a.m. and 2:30 p.m. in parts of Frontierland, Liberty Square, and down Main Street, U.S.A. It seems these show times will be the new regular show times for Festival of Fantasy through March 12. Beginning on March 13, showtimes will be 12:00 p.m. and 3:00 p.m., but as always, be sure to check the My Disney Experience app for the most up-to-date information.

Have you ever seen Festival of Fantasy at Magic Kingdom? Let us know in the comments below.