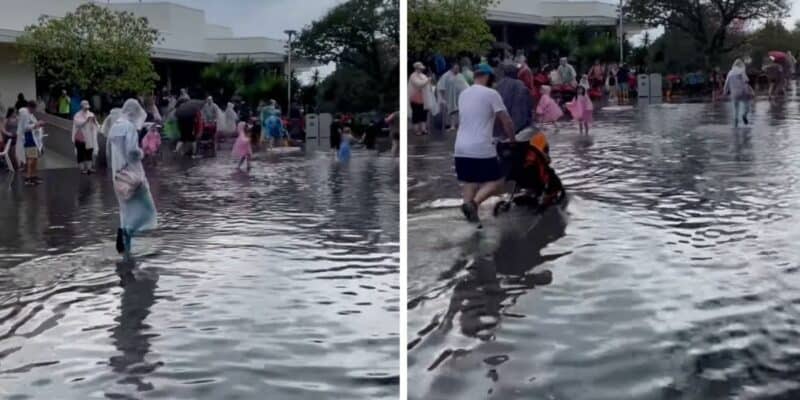 When it comes to Walt Disney World Resort in the summer, there are two things you can count on: rain and heat. Being the sunshine state, Florida is privy to heavy rainstorms filled with lightning and thunder, as well as humid heat that will always sandwich the bad weather. When this happens, Guests at Walt Disney World tend to take cover.

Oftentimes, Guests will bring their own umbrellas and ponchos when visiting Magic Kingdom, EPCOT, Disney’s Animal Kingdom, and Disney’s Hollywood Studios to avoid paying the costly Disney prices for the rain protection, which is always a smart idea that will also help curb your day from disappointment. Being prepared for rain will ensure that you are able to stay as dry as possible, right away. That being said, sometimes, no amount of protection will be enough unless you are in your literal swimsuit!

We recently reported of Disney’s Hollywood Studios and EPCOT flooding during a downpour, and today, we can see that Magic Kingdom suffered the same fate right after the iconic return of Disney’s Festival of Fantasy parade! Streaming the Magic took to Facebook to post a flooded Tomorrowland where we can see Guests’ feet completely submerged underwater.

Because of situations like this, I often suggest that Guests bring a pair of flip flops in their bag so that their runners do not end up completely drenched, as walking in wet socks is never a great solution.

More on Festival of Fantasy

Today, the Festival of Fantasy returned with some changes. We can see some of our favorite floats like the Tangled, Peter Pan, and The Little Mermaid sections were back in action while Brave‘s float seemed to be missing. There were also far less performers than prior to the pandemic. As well, the “Zip-a-Dee-Doo-Dah” reference has been cut from the show. Right as Donald Duck approaches on his float, you can hear the “Mickey Mouse March”, which used to turn into “Zip-A-Dee-Doo-Dah”, but that no longer occurs and instead, it is replaced with music.

Disneyland Paris also recently removed the song from its Disney Stars on Parade. As of right now, Disney has not yet made an announcement on when Splash Mountain would be rethemed to The Princess and the Frog, and the attraction remains open to the public at Walt Disney World Resort and Disneyland Resort.

Have you ever experienced rain like this while at Disney World? Do you have any tips and tricks?