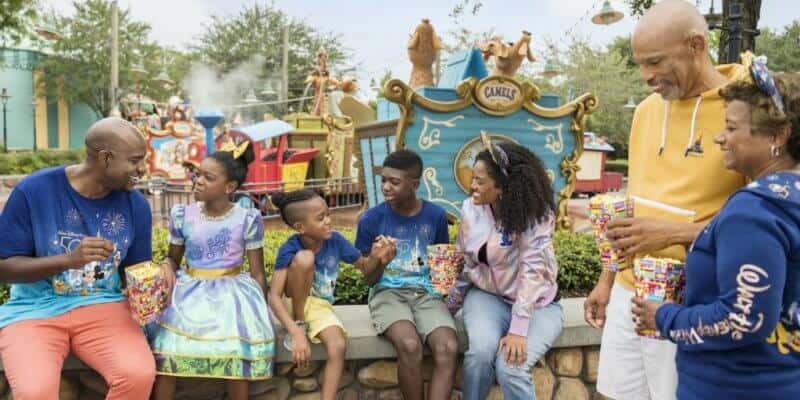 If you go to Walt Disney World, one thing you will surely want to walk away with is some sort of souvenir from your visit. Some Guests like to collect pins, others want a shirt, perhaps a plush or mug is your style of a Disney memory. Whatever you are looking to buy, there is a good chance that your perfect Disney keepsake is somewhere on Walt Disney World property. Or, at least we hope it is! It seems that some Guests are now having a tough time finding a classically Disney souvenir, and they are not too fond of the current IP domination that we are seeing in many shops across the Parks.

McCarthy noted that this would be “good for some people’s waistlines” when they visit Walt Disney World Resort and Disneyland Resort. Since then, we have already seen portion sizes shrink, while costs have risen for many different food and beverage items across the Park. On top of that, merchandise costs seem to only be growing over time, with many T-shirts costing closer to $40.00!

One Disney Guest took to Reddit to discuss the merchandise, noting that they found it difficult to find a more “classic” style of merchandise:

I just got back from my first trip in a long time and I found myself really disappointed by the merchandise options. It should not be so hard to find a shirt that just says Disney World on it. When i come off Star Tours why can’t I buy a hat that has the Star Tours Logo on it? Instead it’s just miles of Grogu, and I love him but I can get Grogu stuff at literally any target in America, shouldn’t the ride gift shops have more merchandise specific to the ride?

Same for Epcot, I would love a t shirt with a simple spaceship earth on it but no go. Just the same stuff that can be found at Disney Springs. There is some fun stuff at world showcase but I want more park specific merch it shouldn’t be that difficult.

It seems that this was not the only Disney Guest feeling that they cannot find what they were looking for. Another noted, “I was really disappointed by the soft toy selection. I remember World of Disney used to have an entire section just for soft toys now it’s just a wall with maybe 10 different types. There is more of a selection in our local Disney store.” Or perhaps, the Guest meant there used to be a better selection before the majority of stores shut down. In response, a third Guest chimed in, “We ran into similar. My two kids couldn’t even find anything to buy!! My youngest wanted a Kermit so bad. And nothing. He wanted to buy a hat and couldn’t find anything he liked. We were willing to spend money, but came away with popcorn and I got a few mugs.”

Another Guest noted that the quality of the merchandise has been on a downward spiral for years:

The diversity of merchandise has been declining for YEARS. When I look at the special items I have, I am so grateful I got them because nothing like them is sold any more. Every time I have gone back since the late 90’s, I’ve been coming home with money, not products. I saved up money to spend and found nothing I wanted to buy. I didn’t used to have that problem and it goes back to the selection.

Personally, I am a fan of a lot of Disney merchandise, specifically their home collections which give a minimalist Disney feel, however, there is a lot of merchandise that would not be my style. To the original poster of this thread, I would suggest checking out the Vault collection when they are back in town. The collection can be found in multiple locations like Magic Kingdom as well as Disney Springs and brings back the vintage charm on 1971 Walt Disney World with iconic graphics that have a vintage look to them.

What do yo think about the current merchandise at Walt Disney World?