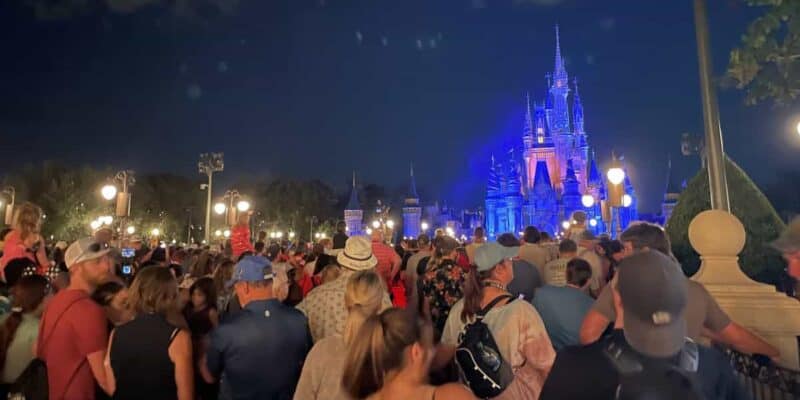 One of the most magical things that can happen at Disney World for some Guests, is seeing others experience pure joy. Many Guests also love to see how a child reacts when faced with magic, seeing their favorite characters like Anna, Elsa, Belle, Ariel, Captain Hook, Minnie, Mouse, Mickey Mouse, Miguel, and more. There is so much magic to take in at Disney World, but perhaps fireworks at Magic Kingdom are among some of the most amazing sights.

Nothing truly compares to seeing Cinderella Castle lit up, while fireworks burst in the air as you stand on Main Street, U.S.A. Oftentimes, however, Guests are left waiting in their preferred viewing spot for quite some time before Disney Enchantment begins. Because of this, it is always great when the Guests around you are able to keep the magic going before the show starts. Plus, after a long day at Magic Kingdom, waiting in line for Haunted Mansion, Space Mountain, and more attractions, having those around you bring a smile or laugh to your face is always a plus.

Well, in this case it seems one little girl was able to make the day of another Guest, just by singing! Rare Bandicoot took to Reddit to post their experience of how a young girl made their evening magical by her interpretation of “We Don’t Talk About Bruno” from Encanto (2021).

The Disney animation follows the story of Mirabel, a Colombian teenager who is the only member of her family who does not have any magical powers. The film features music by Hamilton creator Lin-Manuel Miranda and the voices of Stephanie Beatriz, John Leguizamo, and Wilmer Valderrama.

It has become incredibly popular, topping charts and tending on TikTok, so it is no surprise it has gotten into the heads of young children watching. the film. But what is more impressive is that way that one child altered the song to fit her dinner as she awaited for Disney Enchantment to begin.

Last night Enchantment was delayed due to weather, and this girl was next to me singing “We don’t talk about Bruno”. She couldn’t have been older than 4/5 yet knew more of the words than I did, which is impressive considering how much I’ve seen the movie. Every time she got to the part “He told me my fish would die” she would scream (not too loudly, just adorably), “Next day DEAD!”. Since the show was delayed, her parents were trying to get her to eat a hot dog they got from near by, they even told her if she finished it, she could go get something special from a near by store with her dad. Instead, this little adorable, cutest, and wittiest girl in the world starting singing “We don’t talk about hot dogs no no no”. LOL LOL I was laughing so hard, I had tears in my eyes. It completely made my night, and was 100% worth the close to 2 hour delay. btw in the end, she happily ate part of the hot dog and got to go to the store. LOL

It’s the little moments like this that make my trips “Magical”. I had more fun talking to people during the rain delay and wait for the fireworks, than I did anything else. It’s always the unexpected moments that make for the best memories. Next time something is going wrong, or not as you expected, just take a look around and take it all in, start a convo with someone, do something spontaneous you wouldn’t normally have done. That’s what the Magic is all about.

It seems that Casey’s Corner was able to inspire a new rendition of “We Don’t Talk About Bruno”, but this time, it is “We Don’t Talk About Hot Dogs”. As the Guest who wrote the story noted, these little moments were the aspects of their day that made everything much more memorable and magical!

Disney Enchantment has started at 9:00 p.m. at Magic Kingdom, and it will keep that time for the remainder of March, April, and a portion of May. Beginning on Monday, May 16, however, the show will move back to 9:20 p.m. The times are only available through May 18 at this point, but it would seem that Disney is planning on moving the show back later in preparation for the summer. Hours for Magic Kingdom are only available through May 18, as well. The Disney Park closes at 10:00 p.m. each of these nights.

What magical moment have you had at Disney due to another Guest?