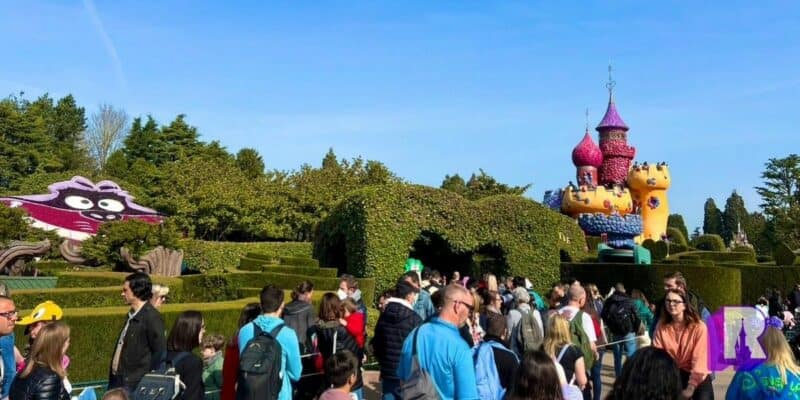 Disneyland Paris is hitting its stride as the Parks celebrate the 30th anniversary! At the moment, face characters have also returned to regular meet and greets as well, making Disneyland Paris the first Park to officially return to normal when it comes to meeting all of the various Disney characters.

Now, we can see crowds are surely picking up at Disneyland Paris with queues overextending by a big amount. DLP Report (@DLPReport) posted that the queue for Alice’s Curious Labyrinth is overflowing, with a photo that shows the plethora of Guests around.

As usual, you know it’s a busy day when the Labyrinth queue is overflowing.

As usual, you know it’s a busy day when the Labyrinth queue is overflowing: pic.twitter.com/5qTvHCqVe8

Seeing an overly long line for Alice’s Curious Labyrinth is often a strong indicator that Disneyland Paris is rather busy, as the ride is not one of the more popular options in the Park. Disneyland Paris recently had much lower crowds last month before the celebration began, but now, it seems that Guests can expect steady crowds to climb as we approach the summer months.

A lot of Disneyland attractions are also currently under refurbishment, which could be causing an influx of Guests in other rides around the Park. At the moment, “it’s a small world”, Frontierland Playground, Les Cabane Des Robinson, La Galerie De La Belle Au Bois Dormant, Les Mystereus De Nautilus, Pirate Galleon, and Thunder Mesa Riverboat Landing are all closed.

Are you planning to go to Disneyland Paris in the near future? Let us know in the comments below!