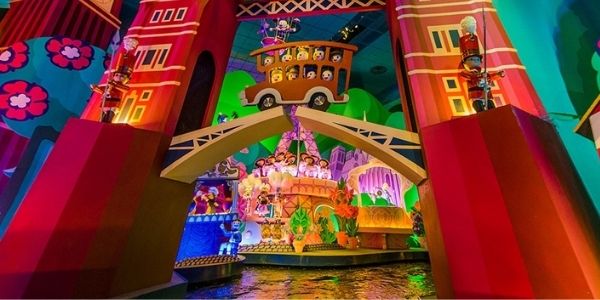 Out of all the classic and iconic attractions in the Disney Parks, few compare to the legacy of “it’s a small world.”

Related: Disney Guest Told to Throw Bag Away, Says “Magic is Being Chipped Away For Money”

Love it or hate it, you have to admit it is a legendary Disney attraction. Featuring the infamous song of the same name, “it’s a small world,” is a fun and colorful adventure for the whole family. At Disneyland Paris, the ride recently went under refurbishment with no word on when it would open back up.

Disney Imagineers have been hard at work on Disneyland Paris’ “it’s a small world” since last year, and we can’t wait until it opens back up. Recently, a few signs have been put up around the attraction, indicating the ride may be opening back up sooner than we thought. A tweet from PixieDust (@Pixiedust_be) showed what the signs look like, take a look below:

New sign on the construction walls of It’s A Small World telling the attraction will reopen “soon”, it will probably take a little longer than soon. #DisneylandParis #DisneyParks

🌍 New sign on the construction walls of It’s A Small World telling the attraction will reopen “soon”, it will probably take a little longer than soon.#DisneylandParis #DisneyParks pic.twitter.com/3KFu6QsCNx

The ride is supposed to open back up in 2023, but these signs make us think it may be a little “sooner” than we think. Disney describes “it’s a small world” as:

It should be noted that Disney has not changed the timeline for the attraction, and that “soon” likely still means 2023!

At Disneyland Paris, lots of changes are coming with the 30th anniversary less than a month away. Walt Disney Studios is adding a massive addition that will include Star Wars, Marvel, and Frozen, as well as their very own Avengers Campus, which will be the first section to open in the Park. One of the biggest changes that we have seen is on Sleeping Beauty Castle, which was covered by a box facade for months. Recently, Disney began to uncover the castle to reveal a stunning, magical masterpiece.

Have you visited Disneyland Paris recently? Do you have a trip planned soon? Let us know in the comments below.