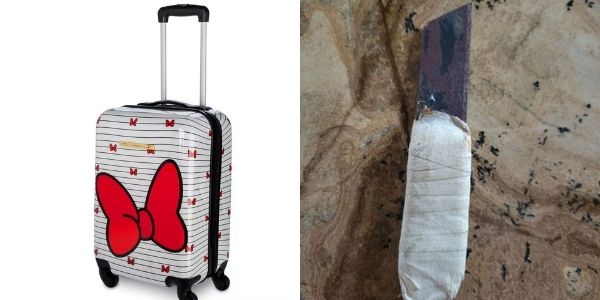 When visiting the Disney Parks you can tell that magic is in the air. From all of the amazing rides, attractions, and live entertainment as well as the delicious food options and amazing shows, a trip to the Disney Parks is sure to be filled with fun.

If you are looking for some exclusive merchandise, however, you may not need to book a trip just to get a t-shirt with Mickey Mouse on it.

But recently, one Guest had a very, very strange item appear in one of their Shop Disney online orders.

Shary Caya Lavoie posted the image below to a Disney fan site online. Here’s the picture they posted as well as the caption that went along with it:

Just got my new Disney luggage, and look, they added a special gift

As you can see, the Guest found an old rusted box cutter inside a piece of luggage they bought from Shop Disney. This is perhaps the very last thing you’d expect to find in a piece of brand new Disney merchandise. I’m sure we all would be shocked to find a dangerous item like this in our package. We are unsure how or why this ended up in the Guest’s package, but are thankful it didn’t harm anyone while they were opening up their package!

Although situations like this do not tend to happen often, this is not the first instance that a foreign metal object was found in a piece of Disney merchandise. We have reported in the past on a Guest finding a piece of metal stuck in their Disney-bought candy! Many Guests like to purchase sealed snacks from Disney World that they can carry home with them, as it allows Guests to have a little bit of Disney magic with them even after they leave. Treats such as chocolate, rice krispies, coffee beans, lollipops, and other forms of candy are often sealed tight and won’t perish in your luggage while you return home. But, one Guest found metal in their Strawberry Licorice Wheel from the Contemporary Marketplace at Disney’s Contemporary Resort.

Of course, this was not specifically Disney’s fault, as the candy comes to them from a facility, but still can be worrisome. Incidents like this happen occasionally, and when they do, it is often advised that you report it so that all products within that batch can be recalled.

Speaking of merchandise, recently, Disney fans went crazy for a new piece of exclusive merch at EPCOT in Walt Disney World. Disney releases some limited-time Figment popcorn buckets, and Guests wait in multiple hour-long lines just for the chance to buy it.

Have you ever found something strange in your Disney merchandise or luggage? Let us know if you have in the comments below.