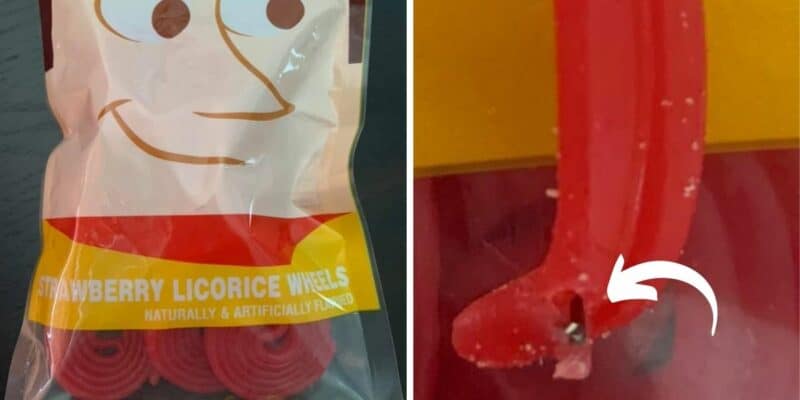 When purchasing candy from Walt Disney World Resort, you typically would expect to bite into sugary heaven, not a metal piece. Well, that is exactly what happened to one Guest.

Kim Del Campo was recently visiting Disney World and after her vacation was over, she wanted to pick up some candy to bring home. Many Guests like to purchase sealed snacks from Disney World that they can carry home with them, as it allows Guests to have a little bit of Disney magic with them even after they leave. Treats such as chocolate, rice krispies, coffee beans, lollipops, and other forms of candy are often sealed tight and won’t perish in your luggage while you return home.

When Kim purchased the Strawberry Licorice Wheel from the Contemporary Marketplace at Disney’s Contemporary Resort, she did not open up the package until she made her way home. Upon opening the bag, Kim unraveled the candy to find a piece of metal lodged into the middle of the candy.

Of course, this was not specifically Disney’s fault, as the candy comes to them from a facility, but still can be worrisome. Incidents like this happen occasionally, and when they do, it is often advised that you report it so that all products within that batch can be recalled. Luckily, Kim noticed the change of color in the candy before she ate it, but since it was in the middle of the candy, there is a chance that someone else in the same situation, especially a child, could have eaten the steel without knowing.

To be sure that you are staying safe while eating not only your Disney candy, but any candy, be sure to always take a look at what exactly you are eating before taking a bite. Unfortunately, Kim is unable to return the candy and get a new bag, as she discovered the metal issue after she returned home. Still, if you ever notice something is wrong with any food item purchased at Disney World, you can let a Cast Member know, and they will ensure you have the correct item as it was intended to be eaten!

Have you ever found something in your food that was not meant to be there? Let us know in the comments below!