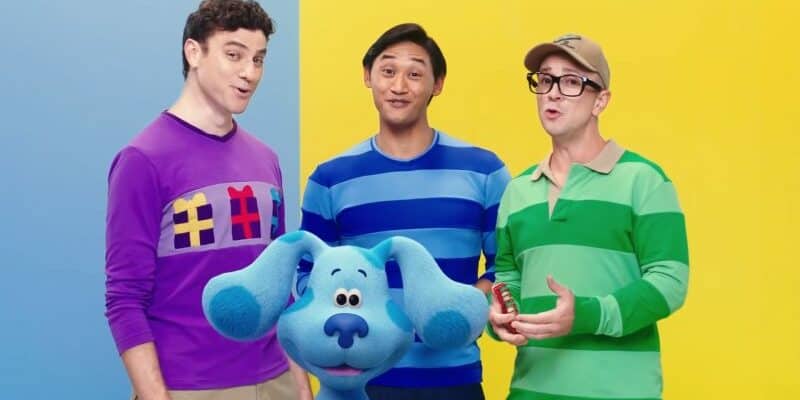 Now, similar to No Way Home, generations and generations of Blue’s Clues fans will be ecstatic as a brand-new film is coming out and it will feature Steve, Joe, and Josh!

No Way Home broke records as both Maguire and Garfield appeared alongside Holland as all three Spider-Men fought the Green Goblin (Willem Dafoe), Doc Ock (Alfred Molina), Electro (Jamie Foxx), Sandman (Thomas Haden Church), and the Lizard (Rhys Ifans), creating one of the most epic scenes in Marvel history.

Now, Blue’s Clues will be doing something very similar as a brand new Paramount movie is being developed, and it will star all three hosts — Steve Burns (Steve), Donovan Patton (Josh), and Josh Dela Cruz (Josh).

During its original run, Steve Burns hosted Blue’s Clues from 1996 to 2002. Burns ended up leaving the show, which is when Donovan Patton took over as Joe, who hosted until the show’s cancelation in 2006.

In 2019, the show was rebooted as Blue’s Clues & You!, which starred Josh Dela Cruz as host Josh. The reboot has brought both Joe and Steve back as recurring characters in the current run of the show, which has generations and generations of kids ecstatic.

Late last year, Steve brought tears to everyone’s eyes when he delivered a heartwarming thank you to his fans of the show and explained why he abruptly left back in 2022. You can watch the message here.

Then, the three hosts, Steve, Joe, and Josh, broke the internet when all three appeared in the Macy’s Thanksgiving Day Parade and sang “You Can’t Spell Blue Without You”.

Now, the three hosts will once again join forces in a new Blue’s Clues movie, which will air on Paramount+. We don’t know much about the film yet, but we do know it will be titled Blue’s Big City Adventure, and will, of course star all three hosts and everyone’s favorite pup, Blue.

A new Blue's Clues movie, Blue’s Big City Adventure, is coming this year, and a full-length Baby Shark movie is coming in 2023. pic.twitter.com/2Jitw4hjYr

Are you excited to see Steve, Joe, and Josh join forces for a new Blue’s Clues movie? Let us know in the comments below.

Comments Off on ‘Blue’s Clues’ Movie to Be the Next ‘Spider-Man: No Way Home’