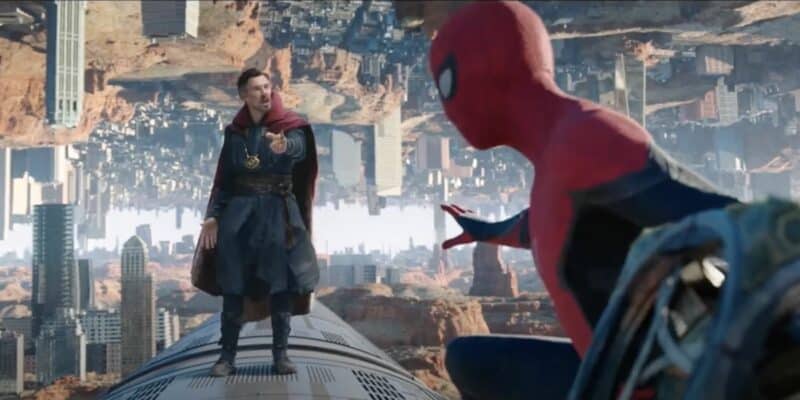 It has been over a month since director Jon Watts’s Spider-Man No Way Home (December 17, 2021) was released in theaters as the latest movie in the Marvel Cinematic Universe with Peter Parker having help from his girlfriend MJ (Zendaya) and best friend Ned Leeds (Jacob Batalon) to save the world from villains such as Green Goblin, Doc Ock, Electro and more from other corners of the Multiverse. It is because of his Aunt May (Marisa Tomei) that Peter Parker realizes he has to save his foes instead of fighting them which is why he tries to run away from Doctor Strange. After slinging some webs away from the Sanctum, Spider-Man doesn’t even make it a block before finding himself in the Mirror Dimension facing the once Sorcerer Supreme.

If you need help remembering the moment where Tom Holland‘s Spider-Man beats Benedict Cumberbatch’s Doctor Strange with trigonometry here’s the beginning of the scene to help you remember:

FrameStore VFX Supervisor Adrien Saint Girons was interviewed recently and discussed his team’s work specifically regarding the fight between Doctor Strange and Spider-Man in the mirror dimension. Girons and his team had a lot of work to make New York and the Grand Canyon merge together in a sequence where Strange is trying to stop Peter on top of a train. Yeah that is a lot to work on, but Girons had some direction for what the fight was expected to look like:

“Well, that’s a good question. One thing that was very important for the director was that it was mathematical, that it was clear that it was Spider-Man using his education to figure this out. So the brief was really worked backwards, that is, figure out the end moment when he gets caught and what the math behind that was. And then we could figure out what the kaleidoscoping look needed to be.”

It’s great that Spider-Man was able to use his brains and all, but Girons continues on to explain that his team at FrameStore worked hard to make the kaleidoscoping environment feel mathematical and this involved a lot of research going into math art with dream catchers which lead to the spirals that you see:

“It’s a bit confusing to work out and sometimes we’d like, ‘Surely that’s not what you’d see through that,’ but it would be. So at times we took some creative liberties just so that it looked more like what people were expecting to see, rather than being a hundred percent accurate.”

Yes, the mirror dimension was an amazing visual spectacle, but it isn’t one hundred percent trigonometry. That’s fine since Spidey needed the win to save the day, just wasn’t a fair fight against Strange.

Doctor Strange in the Multiverse of Madness releases May 6, 2022 in theaters.