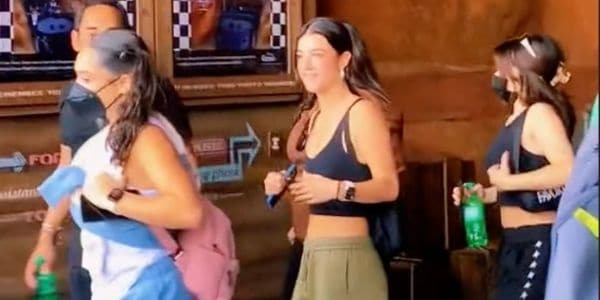 It’s no secret that celebrities love hanging out at all of the Disney Parks, including Disneyland, Walt Disney World, and the international al Disney Resorts. We constantly spot famous actors and athletes visiting Disney, and there’s always a huge buzz whenever Kim Kardashian, Kanye West, or Marvel star Chris Evans is seen spending the day with Mickey Mouse. Recently, we spotted one of the biggest TikTok stars ever.

A TikTok captured the moment Guests saw the 17-year-old social media star coming out of Radiator Springs Racers in Disneyland.

See the full video from @johnnymetro77 below:

As seen in the video, the star was surrounded by her friends as well as a few bodyguards who apparently kept glaring at Guests.

Related: Disney Blasts Retired Happily Ever After and Wishes From Castle After Park Close

As stated earlier, celebrities love visiting all of the Disney Parks and Resorts with people like Kourtney Kardashian and Kylie Jenner completely closing down rides. Although they may get special privileges, the way celebrities are treated in the Parks may surprise you.

Disney’s Club 33, one of the most infamous and exclusive clubs, is a hot spot for celebrities and big Disney fans alike, offering world-class dining and entertainment experiences. Get your wallet ready though, the initial fee to join the club is $33,000, and members will pay $15,000 annually to keep their membership! Find out more about Disney’s Club 33 here.

Have you ever spotted a celebrity at Disney? Who did you see? Let us know in the comments below!

Comments Off on TikTok Star Charlie D’Amelio Spotted at Disneyland