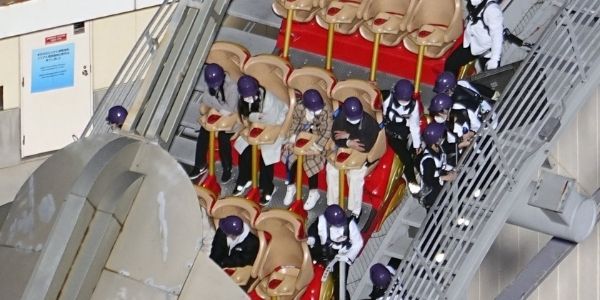 Universal Studios offers Guests some truly thrilling and chilling rides to the millions of Guests who visit the Universal Parks every year including Universal Orlando, Universal Hollywood, Universal Japan, and Universal Beijing. When visiting any theme Park you sometimes tend to forget about how scary rides and attractions are, that is until you get stuck on one.

Universal has a long list of fun and exciting rides like Revenge of the Mummy: The Ride, The Incredible Hulk coaster, the new VelociCoaster themed to from the Jurassic World franchise, and the incredibly-themed Hagrid’s Magical Creatures Motorbike Adventure. Universal Studios Japan has a long list of fun attractions too, especially with the recently-opened Super Nintendo World. Recently, however, Guests were left hanging on the top of a roller coaster in a not-so-fun experience at Universal Japan.

According to various local and worldwide news outlets, around 30 Universal Guests were riding the Hollywood Dream: The Ride roller coaster when the ride abruptly stopped right at the top of a 141-foot tall hill. The scary incident happened around 1:10 p.m. local time, just as the ride was preparing to go down the huge lift hill. Universal Studios Japan said that the attraction’s sensors “detected an anomaly,” and the cause of the malfunction is being investigated.

As you can see in the photos, Guests onboard were given hard hats as they hung 141 feet in the air. After the Universal crewmembers distributed the hard hats to the thirty guests, they escorted them safely down the emergency steps. The attraction remained closed for the remainder of that day. This incident is a little concerning as this was the second time this has occurred in four months, with a power outage in October due to a faulty switchover by the local Kansai Electric Power Co. causing many of the park’s attractions, including Hollywood Dream: The Ride to fail.

Do you have a scary ride evacuation story at Universal Studios? Let us know in the comments below!