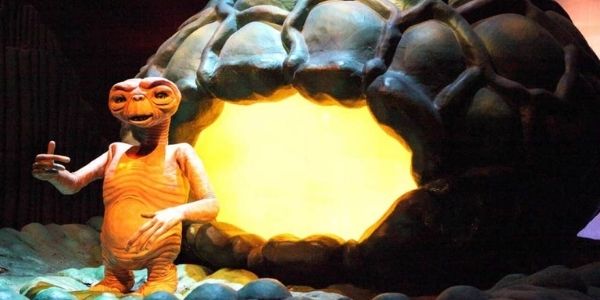 Universal Orlando is filled with fun and exciting rides from the thrilling VelociCoaster to the amazingly-themed Hagrid’s Magical Creatures Motorbike Adventure. But many Universal Guests have a soft spot for one of Universal’s oldest rides and are worried how much longer it’ll stay in the Park.

The E.T. Adventure, based on the beloved film E.T. the Extra-Terrestrial (1982), is the definition of a classic Universal ride. Although other iconic attractions have close over the years like Jaws or Kongfrontation, E.T. Adventure still stands strong, letting Guests put themselves into the film daily. However, many Guests are starting to wonder how much longer this attraction will stay at Universal Studios Orlando.

How much longer will ET stay at Universal?

Now I know because of the whole Steven Spielberg contract thing, we can’t get rid of ET or else we lose him as a creative consultant. I don’t know if removing ET will also have him removing all of Jurassic park from Islands of adventure as well but I feel like eventually it might be time to move on from ET. It does get people but it It’s not as busy as it used to be. It is also the only remaining opening day attraction

So, how much longer do you think ET will be at Universal?

How much longer will ET stay at Universal? from UniversalOrlando

User u/Icericericire talked about how Disney still has tons of classic rides:

You don’t see Disney hunting down all of their opening day attractions. Universal can keep 1 can’t they???

User u/issmuny0 shared their love for the ride:

I dont care how old I get, I ALWAYS make it a point to go on ET because it’s such a freaking cool ride for kids and adults. So forever i hope, i will personally chain myself to one of the bikes if they try to take it down lmao

User u/darthjoey91 also shared their love for the ride, hoping Universal will never remove it:

I really hope they don’t touch ET beyond refurbishment. Despite the wizard stuff, ET is really the only ride that actually feels magical, especially when you finally take off over the city.

Many Guests pointed out how Stephen Spielberg and Universal have an agreement that this ride will stay in the Parks. As of now, Universal has not made any statements regarding the closure of this ride, but many Guests are worried it may not last long with the direction the Parks and Resorts are headed in. With the success of The Wizarding World of Harry Potter as well s the new Jurassic Park section, it would not be surprising if Universal had plans to one day remove or retheme the E.T. Adventure in Universal Orlando.

There is no doubt that E.T. Adventure is a classic attraction at Universal Park and that closing it would come with some serious backlash. Over the years, many Guests have started to feel a though Universal leans too heavily on screen-based attractions rather than rides with real physical movement and effects. While Guests still love The Amazing Adventures of Spider-Man, Transformers: The Ride 3D, and The Simpsons Ride, many Guests love the storytelling and fun that classic rides like E.T. Adventure can bring.

What do you love about E.T. Adventure at Universal Orlando? Would you miss this ride if they closed it? Let us know in the comments below!