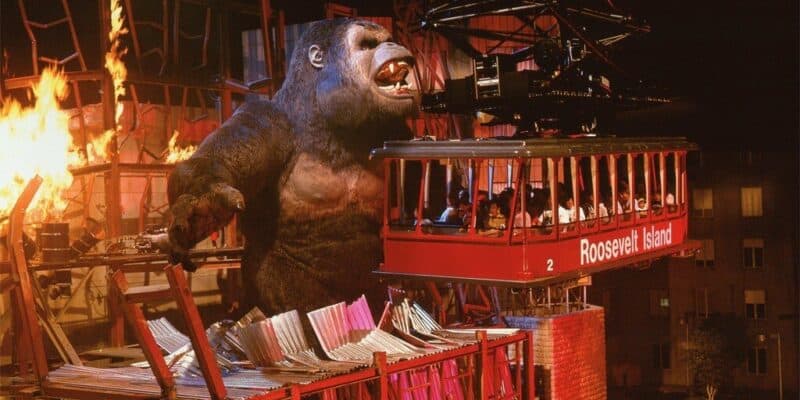 Raise your bananas to the sky in remembrance of one of Universal’s most cherished defunct attractions.

The numerous Universal Studios Parks around the world are known for their amazing theming and exciting attractions. Harry Potter and the Forbidden Journey, as well as the brand new Jurassic World VelociCoaster, offer Guests some insane thrills that’ll make you second guess if you really want to ride them. But one of Universal’s most beloved attractions at the time has been seemingly lost to history.

King Kong Encounter was an attraction found in Universal Studios Hollywood that placed Guests right in front of King Kong himself. The ride was similar to Universal Studios Orlando’s Kongfrontation and offered incredible views of the gigantic King Kong animatronic. Once on the tram, Guests would be taken on a tour of New York City and eventually encounter the giant King Kong multiple times. The jaw-dropping 30-foot tall animatronic was built with a budget of over seven million dollars and weighed seven tons.

It was by far one of the most complex and amazing animatronics of its time. The gigantic robotic ape even featured banana breath! The attraction was frightening, thrilling, and a great time for Guests of all ages. Unfortunately, the ride that Guests had grown to adore was swiftly taken away one day due to a fire at the Park.

The infamous Universal Studios fire of 2008 began when a worker used a blowtorch to warm asphalt shingles being applied to a facade. The worker left before checking if all spots had cooled, and a three-alarm fire broke out. Nine firefighters and a Los Angeles County sheriff’s deputy sustained minor injuries.

The fire lasted a total of 24 hours and damaged the Park quite severely, most notably destroying over 150,000 master recordings of music and, of course, King King Encounter. After the fire, only four walls remained of the entire attraction, forcing Universal to demolish it. Eventually, the attraction was replaced by King Kong: 360 3-D, which opened on July 1, 2010.

Did you get to ride King Kong Encounter before it closed due to the fire? Let us know!