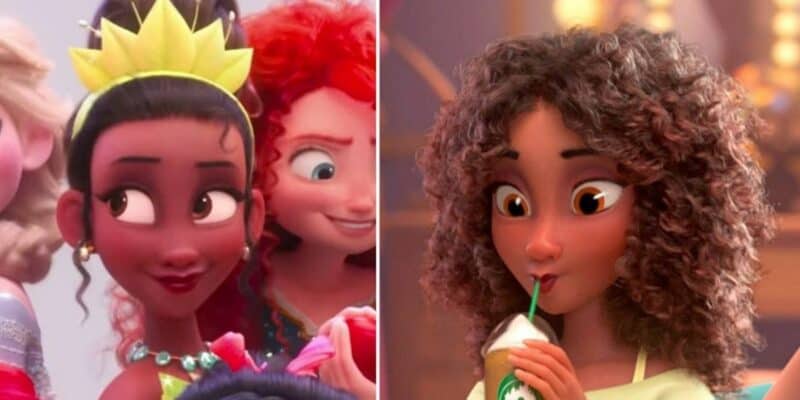 The Walt Disney Company has been pushing diversity and inclusion for quite some time now. From reimagining Splash Mountain into a The Princess and the Frog theme to having a gender neutral dress code at the Parks, the company has made multiple efforts to bring more accurate representation to reflect modern views on gender, race, and sexuality.

Disney animated movies are also showing more representation, including in the latest film, Encanto, which tells the story of an “extraordinary family” who all have a magical gift — except for one, Mirabel. The movie itself is a celebration of the culture, diversity, music and people of Colombia.

However, some Disney fans are taking to social media to accuse the company of “whitewashing” certain characters within various animated movies.

For starters, according to Merriam-Webster, “whitewashing” in the movie and television industry is defined as:

This new sense of whitewashing refers to casting white actors as characters who are non-white or of indeterminate race, as in the casting of Fiennes as Jackson. It can also refer to preferring white actors, directors, cinematographers, and so on, over equally qualified people of color, as in the Oscar nominations. This isn’t a new issue in Hollywood, as our earliest citation for this sense of whitewash notes:

This use of whitewashing began to take off in the late 1990s, as more people of color called out the television industry and Hollywood for their tendency to default to casting white actors.

Though this has been a topic amongst fans for years now, some are continuing to accuse the Walt Disney Company of “whitewashing” within some of their animated films, including Atlantis: The Lost Empire, and The Princess and the Frog.

One Tumblr user took to the platform to write the following, along with a photo of Kida from Atlantis: The Lost Empire:

everyone’s been claiming that everything is whitewashing, so lemme show y’all an example of what actual whitewashing is:

Additionally, a petition called “Tell Disney: Stop Whitewashing Their Black Characters,” was created by advocacy organization Color of Change, which mainly focuses on Princess Tiana from The Princess and the Frog. The petition accuses Disney of “whitewashing” various Disney Princesses and reads, in part:

Whether they are Black characters or other characters of color, Disney’s continual whitewashing of characters sends a message to children and adults alike that Eurocentric features are considered more acceptable.

Disney seems to be focused on whitewashing their Black characters and characters of color. But, in doing so, they’re alienating some of their most dedicated fans. Since her creation, Princess Tiana has been an extraordinarily powerful depiction of a Black woman triumphing over the many obstacles thrown at her to accomplish her dream of owning a restaurant. Princess Tiana has meant the world to those women and girls who want nothing more than to see a Disney princess who looks like them. She represents power and strength for the millions of Black people who watch her. She creates hope for Black children, inspiring those who watch her to imagine infinite opportunities for their own future.

Others, however, are clapping back and are saying Disney is taking a huge step forward and bringing diversity to its animated films. One example of this is Disney’s newest animated film, Encanto, as one Tumblr user pointed out:

Can we talk about the fact Encanto has not only one of the few Latino lead characters in Animated Disney (with a full Latino cast- most of whom are Colombian?) But also some of the first Afro-Latino characters (who are all voiced by Afro-Latinos.)

This is a huge step forwards. Especially for the Latino community for having Colombian culture and Spanish songs shown in a Disney film.

Another user took to Reddit to stand up for Disney, saying they aren’t “whitewashing” any character as “there are plenty of ethnic Disney ladies. You can read their argument below.

to accuse Disney of whitewashing from therewasanattempt

The topic of “whitewashing” has been ongoing in the Disney community for quite some time. In fact, when Ralph Breaks the Internet, the sequel to Wreck it Ralph, was released, the company was caught up in controversy over how Princess Tiana was depicted.

The Disney community had an influence on the company, and as Business Insider stated, “the outcry led to the directors of Ralph Breaks the Internet, Phil Johnston and Rich Moore, to go back in with their team and improve on Tiana before the release of the movie.”

The Walt Disney Company has made multiple efforts in depicting more accurate representation to reflect modern views on gender, race, and sexuality.

What do you think? Do you feel Disney “whitewashes” certain characters? Let us know your thoughts in the comments below.