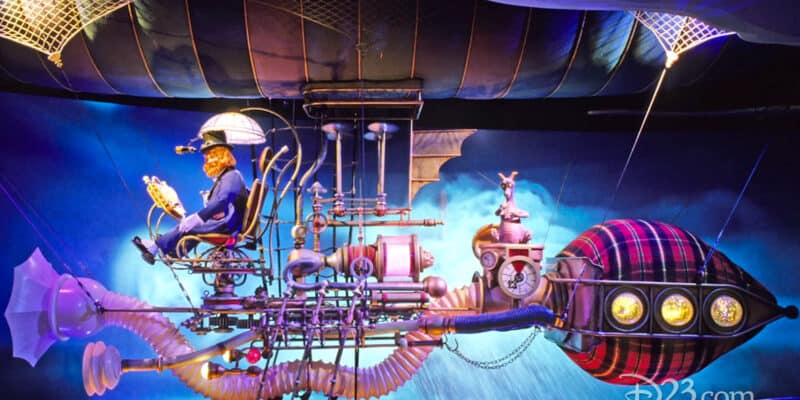 Figment has always had a sturdy fan base since his 1981 creation in the original Journey Into Imagination attraction. Paired with his wizened guide, Dreamfinder, Figment was a playful, mischievous creature that brought out the best in our imaginations.

As EPCOT’s International Festival of the Arts 2022 has returned, the demand for the Figment Popcorn Bucket, as well as Figment merchandise in general, showcases the want for a bigger presence from Figment and his Dreamfinder. It’s time for Disney to rehab the attraction to be more like the original Walt Disney World Resort version.

We love all things EPCOT Center, especially Figment and Dreamfinder. Following the incredibly popular Figment popcorn bucket at the EPCOT International Flower and Garden Festival, Disney goers have noted that if a popcorn bucket could show this much excitement about an original EPCOT IP character, we ought to restore the ride to a portion of it’s original glory. The time has come for Disney to see that this IP really matters to us.

Many people don’t realize that the current Journey Into Imagination with Figment is actually the third iteration of the ride. The second version was scrapped after only two years because the public despised it for the lack of Figment. Disney responded by putting Figgy back into the ride with Dr. Nigel Channing at the Imagination Institute. Better… but a far cry from the original ride concept.

Dreamfinder Guy, a total Dreamfinder and Figment stan, sees the future potential for Figment. Tweeting a picture of the currently popular Figment popcorn bucket, he captions the post simply,

His reign has only just begun.

Yes, sir. It has. With a sad lack of Figment merchandise until “FARTS” (this is a silly, common, acronym for Festival of the Arts) comes along, hopefully, Disney will take notice of this big demand for Figment… and redo his attraction… with Dreamfinder.

His reign has only just begun. pic.twitter.com/VKi9qPM0eI

And He Should Be Played By Zach Galifianakis

A whopping 12 years ago, a Reddit user left a thread with an idea for a Dream finder appearance, within a Disney film. “They Should Make a ‘Journey into Imagination’ Movie with Zach Galifianakis as Dreamfinder….just sayin’,” says user @Rickyisawesome. And we agree, Ricky! You’re awesome for “dreaming” this up all that time ago.

This same idea has been leaking around the internet since that time (at least) and recently, it appeared on the WDWMagic forums. User @Mouse3268, who often posted here in 2019, recalls that their favorite Dreamfinder doppelganger continues to be Zach Galifianakis.  Plenty of folks returned comments saying this would be a fun choice, echoing their love for Figment.

Wait, Who is Dreamfinder?

Dreamfinder was an incredibly beloved character from an original EPCOT Center ride featuring Figment. Both created for the original Journey Into Imagination attraction in Future World at the Imagination pavilion, Dreamfinder and Figment were the evolution of an Imagineer’s idea that was originally planned for Disneyland.

Professor Marvel and his dragon were scrapped on the West Coast and held onto for the development in Florida, eventually being smoothed and refined into Dreamfinder, a serious and wise source for dreams, and his youthful, childlike sidekick, Figment. In an “Ask the Archives” series presented by D23, the Walt Disney Archives gives us the root of the character from the Walt Disney Company:

“Can you share the history of Figment and the Dreamfinder?” In our latest episode of our “Ask the Archives” series, presented by @DisneyD23, Metadata & Systems Technician Francesca talks about the characters created for the original EPCOT attraction, Journey Into Imagination.

“Can you share the history of Figment and the Dreamfinder?” In our latest episode of our “Ask the Archives” series, presented by @DisneyD23, Metadata & Systems Technician Francesca talks about the characters created for the original EPCOT attraction, Journey Into Imagination. pic.twitter.com/JbzVgB0s5K

Disney Park Guests could also meet Dreamfinder in Future World, and Figment’s mischievous little spark would delight little children as he tossed their hats and the wise dreamer spoke with them. I can guarantee you a Figment meet and greet or a Dreamfinder meet and greet (with Fig) would draw longer lines than the Figment popcorn bucket.

William, a Dreamfinder fan on Twitter, pictures the clamor for a possible Dreamfinder popcorn bucket while a GIF of Dreamfinder and puppet Figment entertain Guests around 1981.

Imagine a Dreamfinder popcorn bucket where you eat out of his top hat.

Imagine a Dreamfinder popcorn bucket where you eat out of his top hat. 🎩🍿 pic.twitter.com/Y96wA4u0L5

As EPCOT continues to grow for its makeover for the 40th birthday, we are hoping that this possible retooling of Journey Into Imagination escaped the first phase of reimagining because of the pandemic-related cuts. This perfectly timed outcry for more Figment may poise him and his attraction for the return of the Dreamfinder.

Did we experience the original EPCOT attraction? Would you like to see Dreamfinder return? Leave us a comment below!