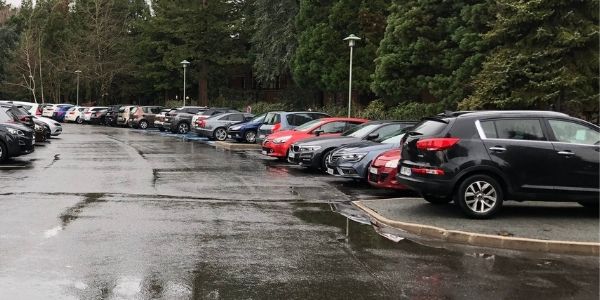 Everyone knows that Disney is magical and a picturesque vacation spot for families across the globe. With millions of Guests visiting all of the Disney Parks and Resorts annually, crowds tend t be a problem. From long lines to virtual queues and difficult-to-get dinner reservations, fighting the crowds is just another skill you have to add to your Disney tool belt. But what happens when the parking lot gets full?

Disneyland Paris is just one of the many international Disney Parks and features some exciting rides and a truly stunning Sleeping Beauty Castle. The Disney Park is truly beautiful, and it’s no wonder why it is so popular among Guests. It actually was so popular today that the parking lot for the Disneyland Paris Hotel became full, leaving Guests stuck parking on the actual sidewalk.

A recent tweet showed the backup and sign that Disneyland Paris had to put out, telling Guests to please not use the parking lot. See the full tweet from @Pixiedust_be below:

Problems with the parking capacity of the Disneyland Paris Hotels

As seen in the Twitter post, the entire parking lot for the hotel is full, with some Guests opting to use the curb for parking. We knew Disneyland was popular but not this popular!

Avengers Campus in Disneyland Paris will be themed completely around the Marvel Cinematic Universe (MCU) and will feature countless Marvel characters like Iron Man, Doctor Strange, Loki, Black Panther, Black Widow, Captain America, Hawkeye, and countless others. We recently covered more progress being made on Disneyland Paris’ Avengers Campus and can’t wait for it to open.

At the Disney Parks in America, both Disneyland and Walt Disney World are getting some exciting expansions as well. Disney Imagineering is hard at work on completing the upcoming Guardians of the Galaxy: Cosmic Rewind at EPCOT and TRON Lightcycle/Run at the Magic Kingdom. Disneyland is anticipating getting its own version of Mickey and Minnie’s Runaway Railway, which first opened at Disney’s Hollywood Studios. More on Mickey and Minnie’s Runaway Railway below:

With the 30th anniversary of Disneyland Paris just months away, this parking issue will likely be one that will continue to increase. That being said, it seems that the issue is targeted to hotels and not Disneyland Park or Walt Disney Studios Park.

Have you ever seen a Disney Park this crowded? What do you think of the crowd level at the Disney Parks currently? Let us know in the comments below!