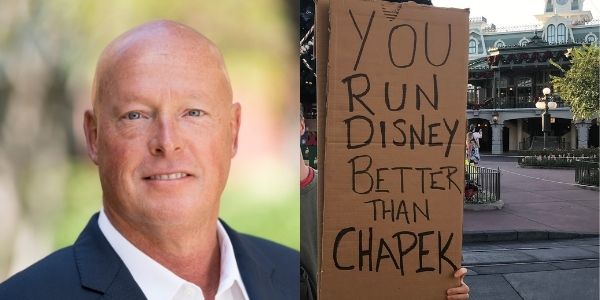 While Walt Disney World, Disneyland, and the international Disney Parks are incredibly fun and immersive places to spend a vacation on, this doesn’t mean that “the Most Magical Place on Earth” is free from controversy.

As has been covered by us at Inside the Magic and many others, Disney Guests are passionate and will make sure their voices are heard regarding attractions, products, and restaurants they may not approve of. This is most noticeable with Disney’s new Genie, Genie+, and Lightning Lane services, as many Guests either do not want to pay what they cost to use or think the old systems were better.

Many Guests do not approve of Chapek, as they see him as a profit-driven, penny-pinching corporate guy rather than an imaginative and exciting visionary. While many blame Chapek for the problems Disney World and Disneyland are both facing like the Galactic Starcruiser and closure of the NBA Experience at Disney Springs, it is important to remember that a lot of these issues were already taking place or were developing while former Disney CEO Bob Iger was in charge.

In a tweet by @Imagine_Ears, a sign saying “You Run Disney Better Than Chapek could be seen as runners passed down Main Street U.S.A. See the full tweet below:

Friend of mine is running the Disney Marathon this morning. He ran by this in Magic Kingdom.

Friend of mine is running the Disney Marathon this morning. He ran by this in Magic Kingdom. 😬 pic.twitter.com/chiuLDb6NL

It is important to note that signage like this is prohibited at the Walt Disney World Resort and that this sign was most likely removed from the Guests very quickly. See more on Disney World’s official theme Park rules and regulations here.

Another controversial event taking place in the “Disney sphere” right now is the upcoming Star Wars: Galactic Starcruiser, an immersive and expensive new hotel experience, keyword expensive. The over $5,000 price tag will surely leave a lot of Guests stunned and the new hotel has already received a lot of cancelations.

What do you think of Bob Chapek? How does he compare to previous Disney CEOs to you? Let us know in the comments below!