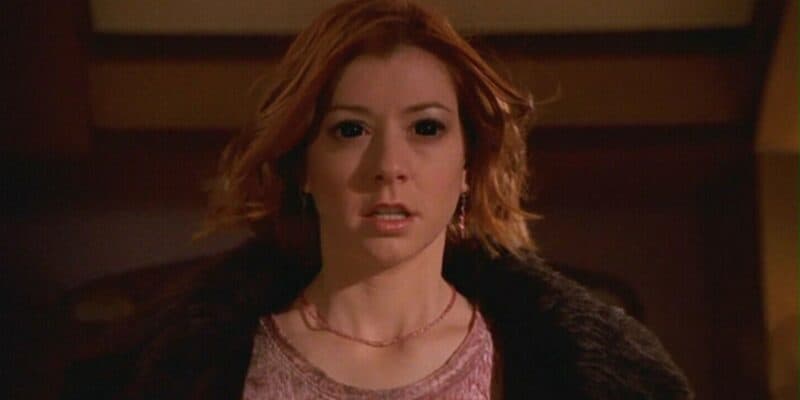 It’s the 25th anniversary for the hit TV series Buffy the Vampire Slayer (1997 — 2003) , so we’re celebrating all things Sunnydale, from the best episodes in the show to our favorite seasons altogether. The Slayer spent a long time saving the world, so we have a lot to say on the matter!

The show focuses on teenager Buffy Summers (Sarah Michelle Gellar), who, despite being at high school, discovers she has a destiny as the next Vampire Slayer. And while she dusts several vamps during her career as the Chosen One, her enemies extend far beyond just blood-suckers.

From petulant gods to evil boyfriends (and evil best friends, for that matter), here are all the “Big Bads” from Buffy the Vampire Slayer, ranked from worst to best.

Buffy the Vampire Slayer Season 6 has a number of redeeming things about it, such as Dark Willow (Alyson Hannigan) and the musical episode “Once More, With Feeling”. The rest, however, can be summed up by its three human villains, aptly named “The Trio”.

Andrew (Tom Lenk), Warren (Adam Richard Busch), and Jonathan (Danny Strong) are super-nerds who decide to become super-villains. But while Warren certainly make waves towards the end of the season, with their robots and time-altering weapons, we can’t help but feel that these guys belong in an Austin Powers movie.

While Buffy the Vampire Slayer Season 4 is one of the best of the seven, its Big Bad is sadly among the most forgettable. Adam (George Hertzberg), a cyborg created by secret underground military installation, the Initiative, has been fitted with all sorts of different demon parts. 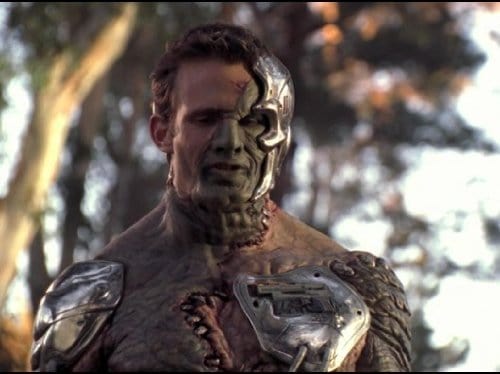 In a bid to overthrow the human race, Adam recruits Spike (James Marsters), and we learn that he’s so powerful that Buffy is forced to use magic to defeat him. Unfortunately, though, despite being mostly human, there really isn’t an awful lot to this villain.

The Big Bad in Buffy the Vampire Slayer Season 3 has the perfect position of power — he’s the mayor of Sunnydale. But, to no surprise whatsoever, Mayor Richard Wilkins (Harry Groener) also happens to be a giant demonic snake, which is revealed in the season’s finale “Graduation Day”.

Wilkins wields slithers of charisma during his time as the main villain, especially when it comes to Vampire Slayer Faith (Eliza Dushku), who comes to see him as a father figure. However, his transformation in the Season 3 finale is something of an anti-climax (and the CGI is really bad).

You might think we’re cheating a little with this one, because Season 7’s evil priest Caleb (Nathan Fillion) is almost an extension of The First Evil (at least by representation), a lot like the ‘ubervamps’. But with that said, he’s still a real person, and a pretty nasty one too!

Before he was Captain Mal Reynolds in Firefly (2002 — 2003), which was also created Joss Whedon, Fillion played the wicked Caleb in Buffy the Vampire Slayer Season 7. But while he pokes out Xander’s eye (Nicholas Brendan) in the episode “Dirty Girls”, he’s otherwise pretty forgettable.

The First Evil is an unusual villain, because they don’t actually possess a physical body. But we think this is what makes Season 7’s Big Bad unique, as they’re able to take on the form of many characters (though mostly Buffy), usually in an attempt to manipulate someone.

The First Evil is the origin of all things evil, and as such, has an army of pure-blood vampires at its disposal. Ahead of the epic battle beneath Sunnydale High in the episode “Chosen”, Buffy tells her army, “We’re not fighting evil anymore — we’re fighting the reason it exists”, which is a line that still gives us chills.

There’s no doubt that vampires Spike and Drusilla (Juliet Landau) are among the most iconic characters in the Buffy the Vampire Slayer universe. Not only that, but each of them can lay claim to having killed a Slayer (Spike two, Drusilla one, but not that we’re counting).

As we know, Spike becomes a member of the “Scooby Gang” in later seasons, but during his time as a recurring Big Bad (of sorts), he’s thrilling to watch, as is his creepy girlfriend Dru. They might end up going their separate ways, but Spike and Dru are easily the most ‘rock n’ roll’ villains in the show.

Before venturing into the territories of demons, cyborgs, gods, and other ancient evils, Buffy the Vampire Slayer kept things very simple. Season 1’s Big Bad is a vampire — a centuries-old vampire, to be specific, and one who’s hellbent on opening, well, the Hellmouth!

The Master proves to be an incredibly enemy to the Slayer, and while Buffy quickly becomes a skilled and experienced fighter, she’s still unprepared when she finally faces him. In fact, he’s the only villain who succeeds where no other Big Bad does — he actually kills her!

We’re not entirely convinced that Willow deserves to be on this list, because who can blame her for going all Sith Lord when Tara (Amber Benson), the love of her life, is killed in front of her in “Seeing Red”?! Nevertheless, Dark Willow does serve as the Big Bad towards the end of Season 6.

Having already become dangerously addicted to magic, Willow finally gives in to the dark side (no, not that one) when Tara is killed. But despite having seen her cast some powerful spells, fans were shocked to see the extent of her new powers — and her anger — as showcased in “Villains”.

Whether it’s in the first three seasons of Buffy the Vampire Slayer, or his own spin-off show, Angel (1999 – 2004), David Boreanaz is excellent as the vampire with a soul. But Angel pales in comparison with his evil alter ago, Angelus (although Angelus is actually a lot paler).

We officially meet Angelus in Buffy the Vampire Slayer Season 2, after Angel experiences a moment of happiness with Buffy. But what follows is far from bliss, as the wicked, manipulative, blood-sucking psychopath brutally murders Sunnydale High teacher, Jenny Calendar (Robia Scott).

We think Glory AKA Glorificus (Clare Kramer) would be thrilled that we’ve saved her for the top spot — after all, the bratty, petulant, and entitled goddess sure does love a bit of attention! But one of the reasons she’s our favorite Big Bad in Buffy the Vampire Slayer is because she’s the most powerful.

Her personality also sets her apart from other villains in the show — she’s erratic, emotional, self-obsessed, and pretty sassy too! And the fact that she’s not only bound to our mortal realm, but to the body of a mortal, adds an interesting and complex layer to her character.

The “Buffyverse” is finally being revisited in the brand-new novel “In Every Generation” by YA author Kendare Blake, which follows Frankie, the daughter of Willow, who discovers she’s the next Slayer.

As it’s the 25th anniversary, Buffy the Vampire Slayer is being rediscovered by fans. However, it also finds itself under the spotlight again due to more controversy surrounding the show’s creator, Joss Whedon.

Buffy the Vampire Slayer and Angel are now streaming on Disney+.

Who are your favorite villains from Buffy the Vampire Slayer?