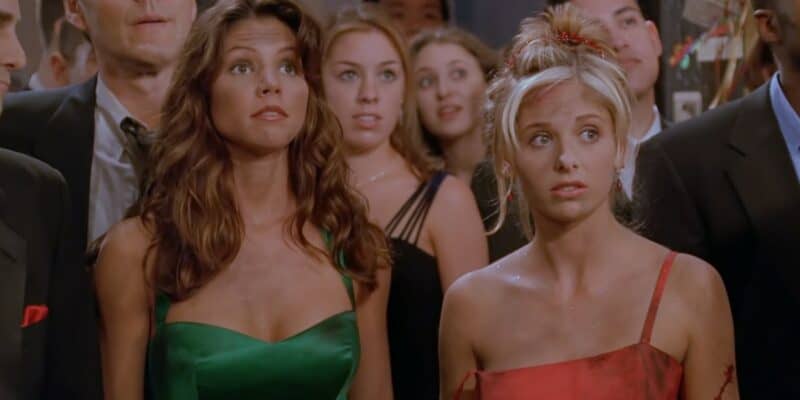 Once a celebrated creator that brought the iconic pop culture phenomenon Buffy the Vampire Slayer into the world, the industry has slowly been turning its back on director Joss Whedon. After numerous bouts of controversy and callouts of confrontational and indecent behavior, the Marvel director has once more come under fire following a recent interview.

Buffy the Vampire Slayer debuted in 1997 and introduced the titular character of Buffy Summers (Sarah Michelle Gellar), the Scooby gang, and, of course, the Hellmouth, into the universe. Helmed, at least at first, by creator Joss Whedon, the series ran for an impressive seven seasons and made households names out of stars like Gellar, Alyson Hannigan (Willow Rosenberg), Nicolas Brendon (Xander Harris), and Charisma Carpenter (Cordelia Chase) while also featuring talent like Anthony Stewart Head as the Watcher, Giles.

Whedon would go on to create the Buffy spinoff series, Angel starring David Boreanaz, and later, the critically acclaimed Firefly in 2002 starring Nathan Fillion as Malcolm “Mal” Reynolds. Throughout the years, Whedon has had a generally illustrious career with screenplay credits on Pixar’s Toy Story (1995) and co-created the popular ABC series, Agents of S.H.I.E.L.D for the Marvel Universe. For film, Whedon directed Serenity (2005), his spinoff of Firefly, and later The Avengers (2012) for the Marvel Cinematic Universe and DC film Justice League (2017) at Warner Bros. based on the DC Comics team of the same name.

His direction on Justice League came after the original helmer, Zack Snyder, had to step away from the project for personal reasons. Snyder did however eventually release his own version of the movie, the so-called “Snyder Cut”, which saw an almost four-hour version of the film released on HBO Max. The movie also stars Ben Affleck (Bruce Wayne/Batman) and Henry Cavill (Clark Kent/Superman).

It may sound like Whedon is one of the brightest talents in Hollywood but his career has been tarred with criticism of bad behavior and an unruly, inappropriate temper. Actors such as Gal Gadot (Wonder Woman), Ray Fisher (Justice League), and Amber Benson, Michelle Trachtenberg, and Carpenter from Buffy, have all spoken out in the past about Whedon’s abusive temperament.

Justice League star, actor Ray Fisher, who played Victor Stone AKA Cyborg in the DC Extended Universe movie blasted the director in 2020, calling out his abusiveness on set. Whedon acknowledged the criticisms from his former cast member in a recent New York Magazine Vulture interview, saying he was a “malevolent force” and a “bad actor in both senses”. Fisher had called Whedon out “gross” and “unprofessional” behavior, which was backed up by fellow stars Jason Momoa (Arthur Curry/Aquaman) and Gal Gadot (Diana Prince/Wonder Woman). The latter has gone on the record to state how Whedon left her “shaking”, which the Marvel and DC director suggested was due to language barriers.

Following the interview, stars came out in support of those mentioned and the allegations Whedon was attempting to dispell. Buffy icon, Charisma Carpenter, issued her allyship with Fisher — she, of course, has aired her own grievances about Whedon before. The director has categorically denied the allegations. Via Deadline:

About his interactions with Carpenter, who has said he called her “fat” when she was four months pregnant, Whedon said vaguely, “I was not mannerly.” He also said he was bewildered by her account.

“Most of my experiences with Charisma were delightful and charming. She struggled sometimes with her lines, but nobody could hit a punch line harder than her,” Whedon said. “I did not call her fat.”

Deadline also reminds us of the history between Carpenter and Whedon:

Carpenter last year not only claimed the Buffy and Angel creator called her “fat” while she was pregnant, but threatened to fire her and made people vie for his approval on set.

One specific allegation she recounted was when, in a closed-door meeting after learning of her pregnancy, Carpenter said Whedon “asked me if I was ‘going to keep it.’” The actress said Whedon “proceeded to attack my character, mock my religious beliefs, accuse me of sabotaging the show, and then unceremoniously fired me the following season once I gave birth.”

Whedon’s most recent television show was The Nevers for HBO Max, airing last year. Currently, there are no reported upcoming projects for the disgraced writer and director, whose reign of terror on entertainment sets has been brought to the fore by numerous voices.

How do you feel about Joss Whedon’s non-apology? Let us know in the comments down below.