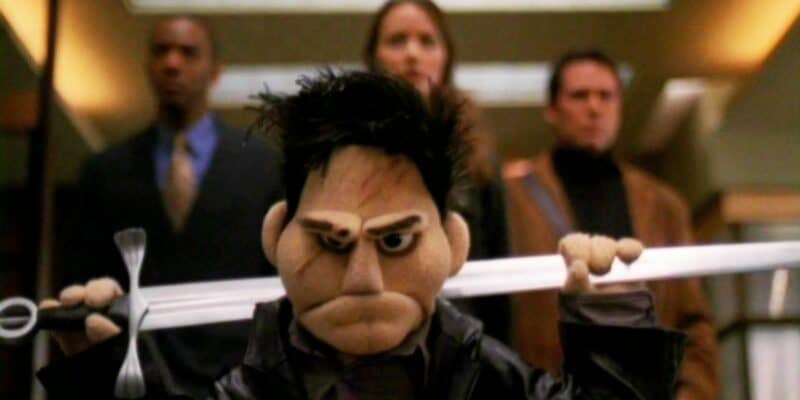 Buffy the Vampire Slayer (1997 — 2003) has officially turned 25! It seems only like yesterday that we first joined Buffy Summers (Sarah Michelle Gellar) at Sunnydale High, where bad hair days and grades would be the least of her problems.

The equally-beloved spin-off show Angel (1999 — 2004) arrived at the same time as Buffy the Vampire Slayer Season 4, and to the surprise of many, was just as entertaining. It quickly made a name for itself too, proving to be able to stand on its own two legs and forge its own identity.

And just like the main show, Angel also has its fair share of memorable episodes. But then this is really no surprise considering it was also created by Joss Whedon, who is certainly no stranger to experimenting with his projects, whether it’s with musicals or muppets!

We’ve already looked at some of the best episodes from Buffy the Vampire Slayer, so now it’s time to look at some of Angel’s finest entries. Funny, dark, weird, chilling, romantic, innovative, heart-breaking, epic – Angel has it all!

Here are the five best episodes of Angel.

It’s rare that the pilot episode in any TV show can be considered one of the best, but we think that the very first episode in the Angel series is the exception to the rule. While it doesn’t necessarily make waves like other episodes on this list, and can easily be lost in the sea of episodes to follow (109, to be exact), what’s particularly impressive is how it instantly distances itself from Buffy.

But that’s not the only thing we love about the Angel pilot. Even having watched it numerous times over the decades, it still carries a certain novelty to it, and seeing Angel (David Boreanaz) now living in Los Angeles, where he’s quickly reunited with Sunnydale’s Cordelia Chase (Charisma Carpenter), just makes us feel all warm and fuzzy inside!

And then of course there’s the ending, in which Angel storms into the Wolfram & Hart office and kicks one of its clients — a vampire — through the window and into the light of day! How’s that for a first impression?

Related: The 5 Best Episodes of ‘Buffy the Vampire Slayer’

Even several years before the Buffy-related Joss Whedon controversy, which was addressed in 2020 by actress Charisma Carpenter in the wake of the Ray Fisher scandal, it was pretty baffling to see Cordelia essentially written out of the show in Season 4. After giving birth to powerful being Jasmine, Cordelia sadly slips into a coma.

Fortunately, and for whatever reason, whether she hadn’t been fired yet, or because Joss Whedon knew Cordelia needed a proper send-off, we get the opportunity to bid her character farewell in the episode “You’re Welcome”. Not only is it a pretty emotional affair, it’s also a return to form for Cordelia, who throughout Season 4 became less and less of the character we love.

The revelation that Cordelia is actually dead in this episode, however, doesn’t come until seconds before the credits roll. And while it certainly packs a punch, it also offers some much-needed closure on the Angel/Cordelia storyline.

Seeing as our best episodes from Buffy the Vampire Slayer include “The Body”, it’s only right that we highlight an equally gut-wrenching episode from Angel. But the truth is that Season 5’s “A Hole in the World” would have made it to our list anyway, because its impact on both the viewer and the remainder of the series cannot be understated.

While studying an ancient artifact in the labs at Wolfram & Hart, Fred Burkle (Amy Acker) is exposed to a deadly spore, which acts exceptionally fast in reducing her life expectancy. Even beyond the first viewing, this dramatic event is completely shocking, and leaves us with a hard lump in our throat as we brace ourselves for the inevitable.

There are, however, two positives which help remedy Fred’s death. First of all, Amy Acker doesn’t leave the show, and secondly, the character of Illyria is awesome. While she’s inadvertently the cause of Fred’s death, she quickly becomes one of the most likable characters in the entire show.

When compiling some of the best episodes in a TV series, sometimes you need to make some sacrifices. In the case of Season 5’s “Smile Time”, though, it would have been a crime to exclude it from such a list. Where else are you going to see David Boreanaz transform into a muppet-like puppet when the stars of a kids’ show turn out to be demonic entities?!

It’s no stretch to suggest that “Smile Time” is Angel’s equivalent to Buffy the Vampire Slayer’s musical episode “Once More, With Feeling”. This episode was probably just as risky, and takes something of a break from the dark adventures to give viewers some much-needed chuckles.

And like “Once More, With Feeling”, the episode has long become a cult classic in its own right. Unfortunately, the Angel puppets are no longer available for purchase, but we can still hope and pray that new and updated versions will be released for the show’s 25th anniversary in 2024!

There aren’t many TV show finales that end on such a bleak note, but seeing as Angel does revolve around evil supernatural forces and all kinds of apocalypses, it doesn’t come as much of a surprise that “Not Fade Away” ventures into the most high-stakes scenario Angel Investigations has ever found itself in. But we wouldn’t have it any other way.

Angel’s long battle with Wolfram & Hart comes to an explosive end in the final episode, when the gang eliminates the Black Thorn, a cult whose goal is to bring about the apocalypse. The last few moments are incredibly atmospheric, in which the surviving characters rendezvous in an alleyway where they prepare to take on the wrath of the Senior Partners during a torrential downpour.

There’s very little closure when it comes to “Not Fade Away”, but that’s part of its beauty. After all, evil never rests, and it would have been unrealistic — and probably unsatisfying — if Angel and the team had somehow managed to rid Los Angeles of all demonic forces in the last episode.

We can’t wrap this up without some honorable mentions! Season 4’s “Awakening” is perhaps the most subversive episode in the series, while “Shiny Happy People” is a wonderful break from the norm (if there is indeed such a thing in Angel). And the penultimate episode “Power Play” really whets the appetite for the show’s explosive finale.

If you need more Angel or Buffy the Vampire Slayer material to sink your teeth into, each show has its own long-running comic book series. There’s even a brand-new novel titled “In Every Generation” from YA author Kendare Blake available now, which follows the daughter of Willow (Alyson Hannigan).

What are your favorite episodes from Angel?

Comments Off on The 5 Best Episodes of ‘Angel’