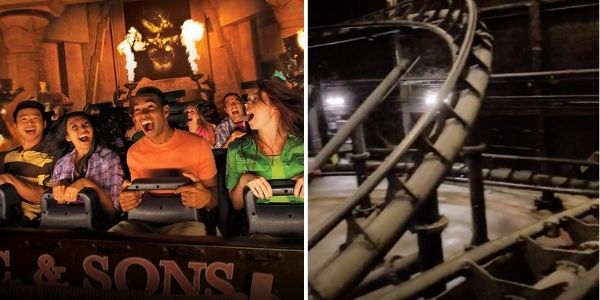 Universal Studios offers Guests so many well-themed and exciting experiences, ranging from intense thrill rides at Hogwarts Castle to relaxing adventures through Whoville in Seuss Landing. One of the most thrilling and scary rides at Universal has to be Revenge of The Mummy: The Ride, which is themed after The Mummy (1999) film series starring Brendan Fraser. This ride isn’t so thrilling when it breaks down, however, and as shown in a recent TikTok, the evacuation can be just as scary as the ride itself.

Related: Brendan Fraser Could Be Returning For New ‘Mummy’ Movie

As shown in the TikTok, Guests are quickly evacuated off the ride at the Orlando Resort once it breaks down, forcing them to go to backstage areas not usually open to the public. See the full video below:

In the video, Guests can be seen getting stuck while on Universal’s Revenge of The Mummy: The Ride, ultimately ending up evacuating off the ride. The Guest who posted this TikTok shares what it’s like to walk behind the scenes off this ride, showing some really cool backstage footage. The Guest also shares how the evacuation path allegedly led them to a 20-foot drop with no guard rail to hold on to.

Revenge of The Mummy: The Ride is about to undergo some important upgrades and renovations during its upcoming refurbishment. It was recently revealed that the ride’s control and electrical systems would be upgraded, along with other various elements throughout the ride.

More on Revenge of The Mummy – The Ride:

If you dare, face heart-pounding special effects and unexpected twists at every turn as you escape the Mummy’s revenge in life-like horror. It WILL change you … forever!

The ride catapults guests at speeds up to 45 mph in virtual darkness.

Many of the Egyptian hieroglyphics on the walls spell out real words and ancient warnings.

Guests have so much to look forward to at the Universal Parks, especially with the upcoming Epic Universe, opening in the near future at Universal Studios Orlando.

Have you ever been stuck on this ride? What is your craziest ride evacuation story? Let us know below!