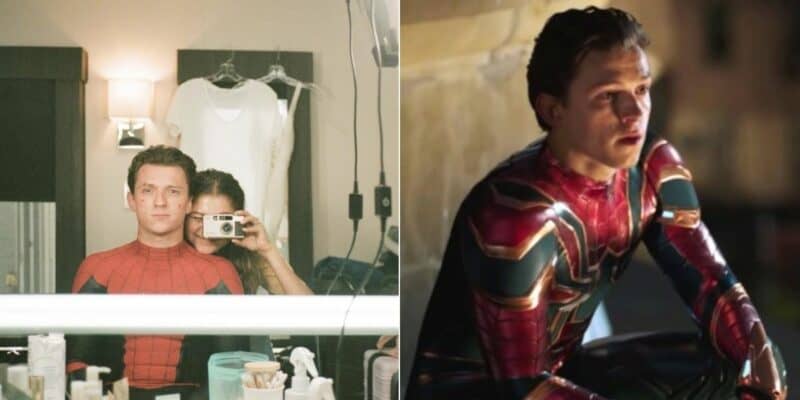 The next installment in Sony Pictures and Kevin Feige’s Marvel Studios’ Spider-Man franchise is, perhaps, one of the most anticipated films of all time. With expectations, anticipation, and spoilers running rampant in the Marvel fandom, the new movie from director Jon Watts has a lot to live up to when it exclusively hits movie theaters on December 17, 2021 — December 15 for UK cinemas.

During a recent interview, Spider-Man stars Tom Holland and Zendaya opened up about the very specific problem they encountered on the set of the next Spidey feature.

The hype for Spider-Man: No Way Home (2021) has been building ever since Marvel and Sony announced the return of characters from the latter’s franchises. Seemingly confirming the Multiverse in action, the official trailer for Watts’ threequel confirmed as such when Holland’s Peter Parker — the eponymous Spider-Man — seeks out Benedict Cumberbatch’s Doctor Strange, Parker’s new Tony Stark/Iron Man figure, to try and undo the moment the world discovered his identity.

Over the past few months, it has been confirmed that Sony characters like Willem Dafoe’s Norman Osborn/Green Goblin and Rhys Ifans’ Dr. Curt Connors/Lizard will reprise their roles from Sam Raimi’s Spider-Man (2002-2007) and Marc Webb’s The Amazing Spider-Man (2012-2014), respectively. Thomas Haden Church’s Flint Marko AKA Sandman is also set to join Jamie Foxx’s Electro and Alfred Molina’s Doctor Octopus in the upcoming Marvel movie.

With so many rumors about these returning villains paying off, fans have been begging for former Peter Parker’s Tobey Maguire and Andrew Garfield to join forces with Holland’s web-slinger in the Marvel Cinematic Universe. It would seem likely considering that the lines are blurring even more now that Holland, and Tom Hardy’s Eddie Brock/Venom. have slipped both into Sony’s Spider-Man Universe and the MCU. Garfield, however, has consistently denied his involvement in the Marvel Universe film, leaked images abound.

As the days slowly fly by, the stars of the movie are sharing what they can, avoiding spoilers (yes, even Tom Holland), and ramping up excitement for, what will surely be, one of the biggest theatrical debuts of all time.

Speaking on The Graham Norton Show, Tom Holland and Zendaya, shared one problem they have encountered while filming together on Spider-Man.

Norton asks Zendaya about the height difference between the onscreen couple — who are also dating in real life — to which the Euphoria star explains:

“There’s a particular stunt, I don’t know if it’s in this, but Spider-Man swings us on top of a bridge and he places me there. We eventually jump off of, I was screaming, he’s supposed to gently, you know, rest MJ on the bridge and walk away from her. Because of our height difference — we were attached — I would land before him, my feet obviously hit the ground before he does, so…”

Holland then chimes in, saying:

“Well, it’s called the bottom mark, and the bottom mark, is the thing that they do in stunts that they basically designed to stop you from shattering your kneecaps, so Zendaya would land, and I’m the superhero, I’m supposed to look cool, and she would land and I would sort of land like this and my feet would swing from underneath me and she would catch me, and they would be like ‘cut!'”

As Holland is detailing the circumstances, the pair demonstrate for the audience and other guests. In fact, you can watch it below!

Holland and Zendaya were first rumored to be a couple after the press saw them kissing inside Holland’s vehicle back in July. Since then, the two have been open about their feelings for one and other both on their own personal social media and in interviews. Recently, Holland told GQ that the couple felt robbed of their privacy after the paparazzi snapped shots of the kiss during the summer. The two have worked together on the Spider-Man franchise films, Spider-Man: Homecoming (2017), and Spider-Man: Far From Home (2019). as well as this upcoming movie.

As for Spider-Man: No Way Home, excitement is surely concentrated on the arrival of Sony’s villains in the MCU and the potential debut of Maguire, Garfield, and Daredevil‘s Charlie Cox also, but there is a slew of returning cast members from the first and second installments in the MCU’s Spider-Man franchise. Zendaya is back as MJ, as is Jacob Batalon as Ned Leeds, Marisa Tomei and Jon Favreau also reprise their roles as May Parker and Happy Hogan, respectively. Benedict Wong (Wong), JB Smoove (Julius Dell), Angourie Rice (Betty Brant), and JK Simmons (J. Jonah Jameson) also star. What’s next for the Avenger? Just days separate fans from finding out…

Have you managed to book tickets for Spider-Man: No Way Home? Let us know in the comments down below!

Comments Off on Tom Holland and Girlfriend Zendaya Have a Problem Filming Together, Star Reveals