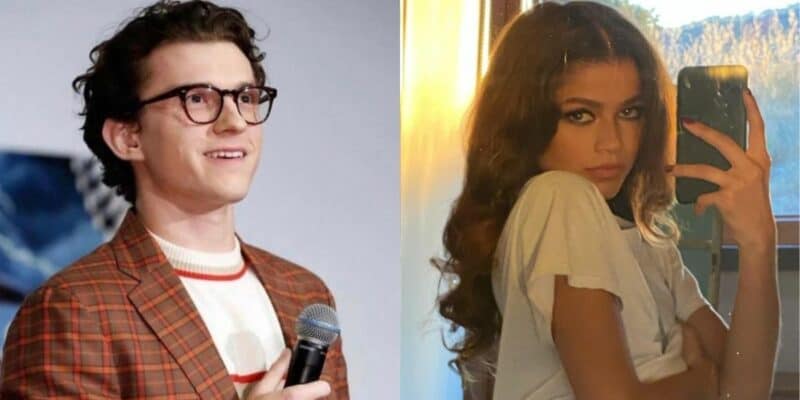 It’s hard to go anywhere without Spider-Man being mentioned. The third Marvel Cinematic Universe installment from director Jon Watts is set to land in theaters this December, and the hype is seemingly out of control. With rumors coming weekly, a new trailer confirming returning villains, and continued denials from actors like Andrew Garfield, the next Spidey venture is sure to draw huge audiences.

However, behind the scenes, the burgeoning romance of leading stars ignited by many dating rumors, Tom Holland and Zendaya, has also been hitting the headlines with Holland speaking out about their privacy being “robbed” back in July after those car photos.

Holland (Peter Parker/Spider-Man) and Zendaya (MJ) will star once again in the Marvel Studios and Sony Pictures team-up, Spider-Man: No Way Home (2021). Following up from the 2019 adventure, Spider-Man: Far From Home and the first solo Spidey outing, Spider-Man: Homecoming (2017), Watts’ No Way Home has been the talk of the superhero town ever since Sony’s Spider-Man Universe actors were confirmed to return.

Jamie Foxx’s Max Dillon AKA Electro and Alfred Molina’s Doctor Octopus AKA Doc Ock are set to return in the latest MCU feature. The two Spider-Man actors from their respective franchises, The Amazing Spider-Man (2012-2014) and Spider-Man (2002-2007), have also continued to be rumored to return alongside Holland’s Peter Parker.

Tobey Maguire (Spider-Man) hasn’t weighed in on the matter but the actor was mentioned by a No Way Home star in a recent interview as well as being spotted with Zendaya in the same restaurant recently. Garfield (The Amazing Spider-Man), however, has denied his suspected role in the film multiple times with Holland also stating the former two Spider-Men aren’t in No Way Home.

It’s safe to say that Holland has been an active part in the secret-keeping, speculation, and promotion of the upcoming Marvel movie. The actor recently surprised audiences at a Spider-Man fan event in Los Angeles after showing the new official trailer, sharing his joy on social media. However, the actor got also got candid with GQ Magazine and shared his feelings on his romance with the Euphoria actress. Holland said:

“One of the downsides of our fame is that privacy isn’t really in our control anymore, and a moment that you think is between two people that love each other very much is now a moment that is shared with the entire world,”

Since the press captured photos and videos of Holland and Zendaya kissing in the car back in July, the two have never explicitly confirmed the romance rumors but, arguably, have made it known over the past few months. From Instagram posts to Holland gushing over Zendaya’s striking look, the two Spider-Man alum, seemingly care deeply for each other. Holland goes on to say:

“I’ve always been really adamant to keep my private life private, because I share so much of my life with the world anyway,” […] “We sort of felt robbed of our privacy.”

“I don’t think it’s about not being ready. It’s just that we didn’t want to.”

Before Holland revealed too much, he decided to keep things to himself saying that he “[respects] her too much” and that “This isn’t [his] story. It’s [theirs]. He ends by saying: “And we’ll talk about what it is when we’re ready to talk about it together.”

“The equal sentiment [we both share] is just that when you really love and care about somebody, some moments or things, you wish were your own,” […] “I think loving someone is a sacred thing and a special thing and something that you want to deal with and go through and experience and enjoy amongst the two people that love each other.”

Aside from their high-profile Spider-Man roles, the two have a rather illustrious career. Holland will next star in Sony’s Naughty Dog Playstation game adaptation, Uncharted (2022), as a young Nathan Drake with Mark Wahlberg (Victor “Sully” Sullivan), amid his Marvel contract uncertainty. Zendaya, fresh from her Emmy win for Euphoria and leading role in Netflix’s Malcolm & Marie (2021), has most recently appeared alongside Timothée Chalamet in Denis Villeneuve’s Dune (2021).

Are you looking forward to Spider-Man: No Way Home? Let us know in the comments below!