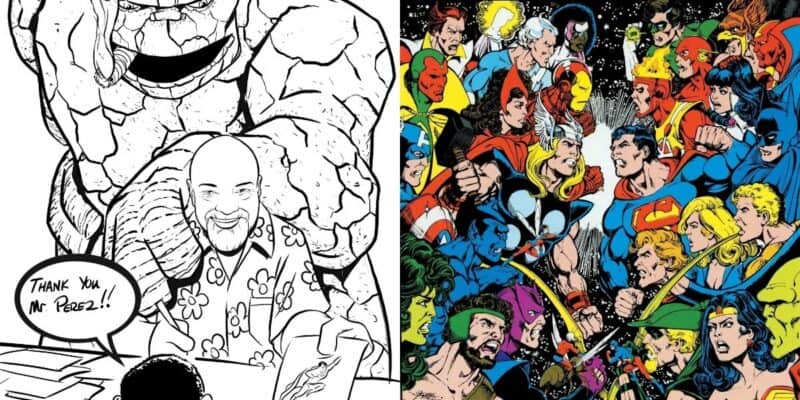 When those who have done so much to impact a fandom, story, and culture that we have grown to love announce that they are experiencing a tough time, the community they have helped to foster tends to come together.

Marvel, which is now an arm of the Walt Disney Company, has quickly sprouted to become one of the most popular aspects when it comes to the company’s IPs. From Disney+ shows such as Loki, WandaVision, What If…? and more, to in-Park representation with Avengers Campus located in Disneyland Resort at Disney California Adventure (soon to be seen in Disneyland Paris as well), Marvel is everywhere.

Right now, Marvel fans cannot stop talking about Spider-Man: No Way home, which will release on December 17. The film will star Tom Holland (Peter Parker/Spider-Man) and Zendaya (MJ), joined by Benedict Cumberbatch (Doctor Stephen Strange), Jon Favreau (Happy Hogan), Marisa Tomei (Aunt May), Jacob Batalon (Ned Leeds). We still are unsure if Tobey Maguire or Andrew Garfield will appear in the film, so their appearance continues to remain a mystery.

Although the on-screen adaptations are popular, the content came from comic books. George Perez is an artist who created illustrations for many Marvel and DC comics. Perez illustrated Marvel’s “The Avengers” in the 1970s and again in the 1990s, as well as “The Incredible Hulk,” “X-Men,” and more. This week, Perez went on his official Facebook page to announce some tragic news.

In the letter, Perez outlines that he has stage 3 pancreatic cancer, with a life span of 6 months to one year, at most.

From George to his fans, friends, and extended family, please read below. This page will serve as a place to connect with George and receive updates. Please, respect the privacy of George and his family at this difficult time and reach out ONLY through this avenue.

Thank you and please see below:

To all my fans, friends and extended family,
It’s rather hard to believe that it’s been almost three years since I formally announced my retirement from producing comics due to my failing vision and other infirmities brought on primarily by my diabetes. At the time I was flattered and humbled by the number of tributes and testimonials given me by my fans and peers. The kind words spoken on those occasions were so heartwarming that I used to quip that “the only thing missing from those events was me lying in a box.”
It was amusing at the time, I thought.
Now, not so much. On November 29th I received confirmation that, after undergoing surgery for a blockage in my liver, I have Stage 3 Pancreatic Cancer. It is surgically inoperable and my estimated life expectancy is between 6 months to a year. I have been given the option of chemotherapy and/or radiation therapy, but after weighing all the variables and assessing just how much of my remaining days would be eaten up by doctor visits, treatments, hospital stays and dealing with the often stressful and frustrating bureaucracy of the medical system, I’ve opted to just let nature take its course and I will enjoy whatever time I have left as fully as possible with my beautiful wife of over 40 years, my family, friends and my fans.
Since I received my diagnosis and prognosis, those in my inner circle have given me so much love, support and help, both practical and emotional. They’ve given me peace.
There will be some business matters to take care of before I go. I am already arranging with my art agent to refund the money paid for sketches that I can no longer finish. And, since, despite only having one working eye, I can still sign my name, I hope to coordinate one last mass book signing to help make my passing a bit easier. I also hope that I will be able to make one last public appearance wherein I can be photographed with as many of my fans as possible, with the proviso that I get to hug each and every one of them. I just want to be able to say goodbye with smiles as well as tears.
I know that many of you will have questions to ask or comments to make, and rather than fueling the fires of speculation and well-meaning but potentially harmful miscommunication, I will be returning to the arena of social media by starting a new Facebook account where fans and friends can communicate with me or my designated rep directly for updates and clarification.
For media and press inquiries, please use the contact information on the page as well. Please respect the privacy of my wife and family at this time and use the Facebook page rather than reaching out through other channels.
I may not be able to respond as quickly as I would like since I will be endeavoring to get as much outside pleasure as I can in the time allotted me, but I will do my best. Kind words would also be greatly appreciated. More details to follow once it’s up and running.
Well, that’s it for now. This is not a message I enjoyed writing, especially during the Holiday Season, but, oddly enough, I’m feeling the Christmas spirit more now than I have in many years. Maybe it’s because it will likely be my last. Or maybe because I am enveloped in the loving arms of so many who love me as much as I love them. It’s quite uplifting to be told that you’ve led a good life, that you’ve brought joy to so many lives and that you’ll be leaving this world a better place because you were part of it. To paraphrase Lou Gehrig: “Some people may think I got a bad break, but today, I feel like the luckiest man on the face of the Earth.”

Many of George’s fans are devastated by this news, but are also glad that George made them aware of the ongoing situation so that they could give him a final thank you. Perez worked on Teen Titans and Wonder Woman comics, among many others such as Super Man, for DC.
Have you seen George’s work in the past?