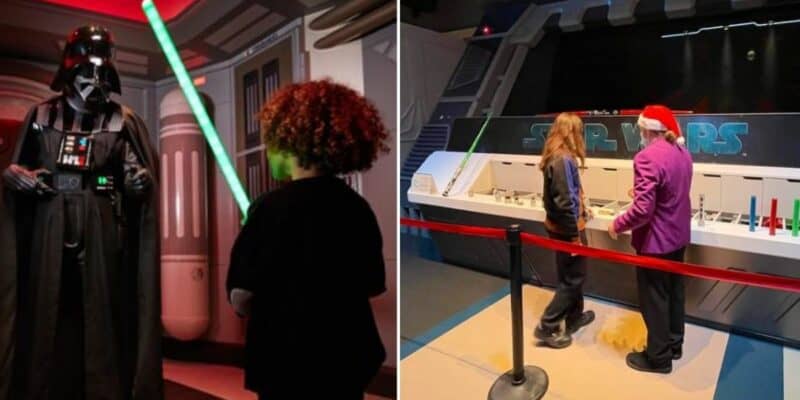 Disney Parks are where magic happens and dreams come true. With a variety of experiences to enjoy — from Disney character “sightings” to animal trails and even lifelike safaris — Disney Guests have the world at their fingertips when visiting Parks across the world.

However, as fans have seen time and time again over the past, some experiences have been modified or stopped altogether. Now, one Park has seemingly stopped Guests from building lightsabers. This comes just weeks after the same Park stopped serving an iconic Disney snack.

Disneyland Paris is just months away from launching its 3oth anniversary celebrations which begin on March 6. 2022. Disneyland Park, Walt Disney Studios Park, and Disney Village will come together in, what is likely to be, a magical extravaganza much like The World’s Most Magical Celebration at the Walt Disney World Resort in Florida. Currently, amid their festive offering, Disneyland Paris has finally debuted their completed Park icon, Sleeping Beauty Castle as well as an all-new parade — Mickey’s Dazzling Christmas Parade.

While the Disney and Christmas magic is out in full force, one fan-favorite experience has seemingly stopped its usual operation. According to Twitter, the lightsaber building activity at Star Traders in Disneyland Park has suspended Guests from building the iconic Star Wars weapon, and instead, Cast Members are constructing lightsabers instead.

At Star Traders, “build your own lightsaber” is still open, but Cast Members now build it for you at a distance to limit manipulations. So I guess it’s “Cast build your lightsaber”.

🛍 At Star Traders, “build your own lightsaber” is still open, but Cast Members now build it for you at a distance to limit manipulations. So I guess it’s “Cast build your lightsaber”. pic.twitter.com/RQOwxlougN

While it is not yet clear why Disneyland Paris has stopped this Guest activity, the tweet suggests it is to “limit manipulations”. It is perhaps also likely that the Disney Park has decided to change this experience to reflect the current times.

Earlier this year, the Disney Park reinstated its mask mandate requiring all Guests aged six and up to wear a face-covering in all locations while visiting the Disney vacation destination. Then, just a couple of weeks ago, France banned all travelers from the United Kingdom from entering the country, and thus Disneyland Paris, amid the UK’s “tidal wave” of Omicron infections.

If building a lightsaber was at the top of the Guests’ list, then they can still take part in other popular Disney attractions, and have the ability to ride certain attractions even quicker using the Parks’ Disney Premier Access. For an additional fee on top of their Disneyland Paris ticket, Guests can use the service to book speedy entry onto rides like Frontierland’s Big Thunder Mountain, Peter Pan’s Flight, and Phantom Manor — this Parks version of Haunted Mansion. And if it’s a Star Wars fix they need, then Guests can also use Premier Access to board Star Tours: The Adventure Continues and Star Wars Hyperspace Mountain — DLP’s very own Space Mountain attraction.

While this tweet and image show Cast Members helping Guests, it is worth noting that the Disneyland Paris website has no indication of whether Guests can still make their own lightsaber while on their Disney vacation.

Find everything you need for your intergalactic adventure in this shop inspired by the Star Wars universe. You can even become a Jedi apprentice and create your own droid or lightsaber!

What do you think of this Disney Park stopping letting Guests build lightsabers?