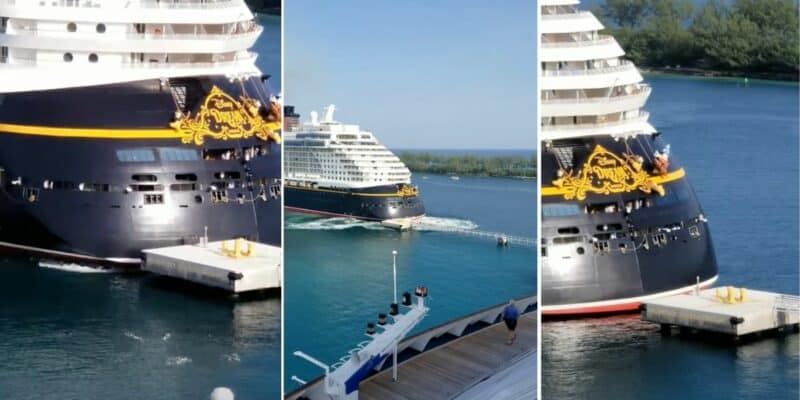 But, even some of the most gorgeous cruise ships have had to have a touch-up from time to time.

In 2017, the Disney Dream was docking in Nassau when the ship was not properly positioned for docking. It ended up crashing into part of the pier, which is made from concrete. The pier seemed to take little to no damage; however, the Disney Dream could not say the same.

The Disney Dream violently struck the dock in Nassau, Bahamas while trying to enter a berth on Saturday, September 30th. Photographs posted on line show damage to the cruise ship’ stern above the waterline.

YouTuber SCOTT LEWITT took a video of the incident, and titled it “Pretty sure Captain Goofy may be looking for a new job…” You can watch the crash below and see how the front of the ship takes a heavy impact as it scratched while hitting into the pier. The crash may not be recent, however, it is a video that many Disney fans have not seen in the past!

The video has appeared on multiple social media platforms, and the original YouTube video has nearly 2,000,000 views! Viewers were quite shocked to see the ship crash this way, as well as stunned to see the pier remain unmoved while the ship took a beating. After the ship crashes, we can see it backs back up in order to dock correctly.

K9-1000 was just as impressed to see the dock not even crack!

The guy who made the concrete platform should get a promotion. Not even a cruise ship could break it.

The video is once again gaining more recent traction as it is still being shared on TikTok! Donna Disney (@donnadisney62) has had a ton of views on the repost of the video!

Of course, the ship is perfectly fine now and is once again sailing without any issues! This is not something we have ever seen happen in the past, so Guests boarding a DCL ship should not be worried about any future sailings, which is why the video is so shocking.

At the moment, Disney Cruise Line is once again sailing with Guests after a lengthy pause due to the ongoing pandemic and COVID-19. Guests aged five and older must all be fully vaccinated if they want to see Castaway Cay or even step onto the ship! As we noted, the Disney Wish will make her maiden voyage in June of 2022, which is just a few months away. The ship will be filled with Disney offerings that are unlike no other, such as the Star Wars Hyperspace Lounge, a Toy Story splash pad just for kids, and incredible Frozen and Marvel dining experiences for the whole family! Some of the Tower Suites have also been said to be comparable to the Cinderella Royal Suite in Magic Kingdom!