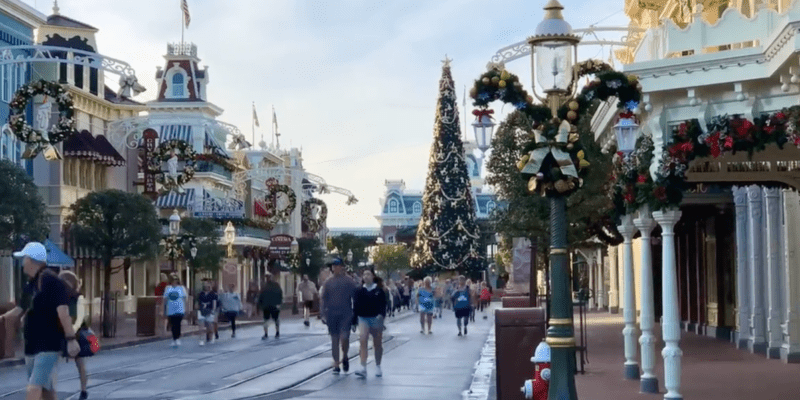 Walt Disney World is once again welcoming what looks to be pre-pandemic crowds at the theme parks — including Magic Kingdom, EPCOT, Disney’s Hollywood Studios, and Disney’s Animal Kingdom.

Crowds have been pouring back into the Walt Disney World for a few months now, but they only continue to grow as we quickly approach the holiday season.

If you are planning to visit Walt Disney World in the near future, except pre-pandemic crowd levels as more and more families are eager to once again visit the Most Magical Place on Earth. In fact, we recently reported Florida tourism numbers in the third quarter of 2021 surpassed those from the same period in 2019, which is before the coronavirus pandemic affected the United States and its tourism.

And we can see this reflected in recent visits to the theme parks. For example, this morning, Twitter user and Disney fan Jason Grandt took to the social media platform to share a video of rope drop at Magic Kingdom, which you can see below:

Many Guests rope drop the theme parks at Walt Disney World in attempt to ride their “must-do’s” prior to long lines. For example, those wishing to ride Seven Dwarfs Mine Train at Magic Kingdom or Avatar Flight of Passage at Disney’s Animal Kingdom tend to arrive at the Park prior to official Park opening in attempt to be one of the first Guests inside, meaning they could then make their way towards the queue before the crowds pour in.

If you plan on rope dropping a Disney World theme park on your next vacation, check out our tips and tricks here.

With all of this being said, if you have an upcoming Disney World vacation, expect to see a bit more “normalcy” compared to last summer when the theme parks first reopened after temporarily closing due to the ongoing pandemic. And be sure to familiarize yourself with the current safety protocols as the theme parks have continued to modify the rules and regulations.

Comments Off on Video: Guests Rush Into Magic Kingdom at Rope Drop For Holiday Season