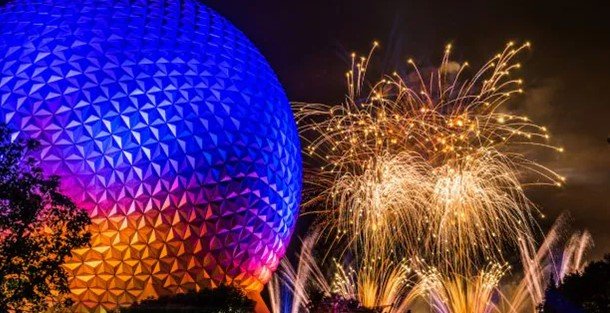 UPDATE: Just hours after this article was published, Disney has once again updated the calendar. EPCOT is now open until 12:00 am as before!

It’s hard to believe but 2021 is coming to an end with 2022 on the horizon! EPCOT has had a busy 2021 with plenty of construction and transformation. The former two “worlds”, Future World and World Showcase, have now shifted into four “neighborhoods” including World Celebration, World Discovery, World Nature, and World Showcase. A new restaurant, Space 220, has made an exceptional debut. The new nighttime spectacular, Harmonious, is now played nightly, and Disney’s newest attraction, Remy’s Ratatouille Adventure is welcoming Guests in the France Pavilion. While Guests make plans to ring in the New Year at Disney’s Parks, you’ll want to take note that EPCOT has now trimmed their hours on New Year’s Eve… meaning you’ll want to plan to party elsewhere.

In years past, New Year’s Eve was a big deal for Walt Disney World. Special fireworks and events could be expected to keep the New Year’s crowds entertained. EPCOT is known for putting on a good show! In 2020, due to the pandemic, no Disney World Park stayed open later than 11:00 pm. Now in 2021, we’ve been eagerly awaiting to see what Disney will have to offer. Unfortunately, if you have Park reservations for EPCOT on December 31, you may want to look at switching it to another Park, if available, that stays open later to celebrate New Year’s Eve.

Previously, the Walt Disney World Resort calendar showed EPCOT remaining up until 12:00 am on December 31, 2021. This led to the hope that just maybe EPCOT would be hosting some exciting New Year’s Eve fireworks. Now, the calendar has been updated to show EPCOT will be closing at 10:00 pm on December 31. Furthermore, the nightly fireworks spectacular, Harmonious, is scheduled for 6:30 pm.

Are you still hoping to visit a Walt Disney World Park to truly enter the New Year while in the Park? The current Disney calendar does still show Magic Kingdom and Disney’s Hollywood Studios will remain open on December 31 until 12:00 am.

Why do you think Disney dropped EPCOT from the midnight closing list? Let us know in the comments.