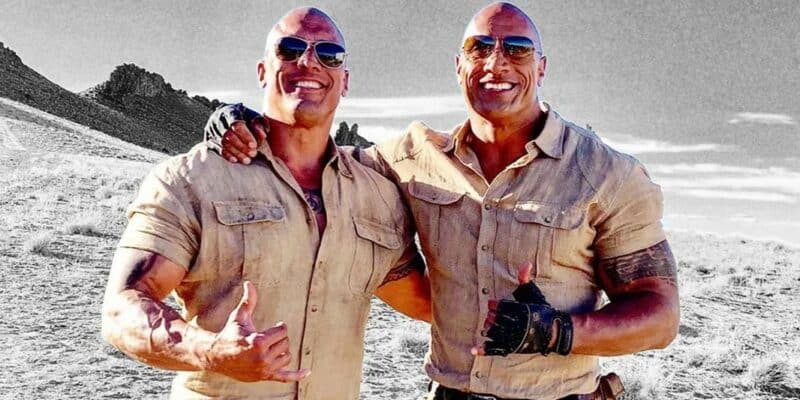 Check this out! We all know Dwayne Johnson (AKA “The Rock:), right? The former professional wrestler turned actor and now dubbed one of the most popular celebrities in the industry. His beloved personality (and yes, let’s be honest – good looks) has people even questioning if Johnson should join the 2024 United States Presidential election. While “The Rock” may be the center of attention most of the time, his double is stepping into the spotlight as stuntperson of the year!

RELATED: Dwayne Johnson Listens to 21 Minutes of This Unexpected Disney Soundtrack Every Day

As Disney fans, we have enjoyed Johnson’s role in Moana as the voice of Maui and Skipper Frank in Disney’s live-action Jungle Cruise film. Cover your ears Disney+, but most recently, Johnson’s newest Netflix film, Red Notice (with Ryan Reynolds and Gal Gadot) has become a huge success. With high-action films, Johnson’s need for a stunt double is evident… here enters Tanoai Reed.

Dwayne Johnson or double Tanoai Reed? The two are built very similarly, as Reed is actually a distant cousin of Johnson’s. The Hollywood Reporter shares that the “6-foot-3 stuntman Reed has been by Johnson’s side for 20 years as the actor became one of the biggest (and busiest) stars in the world.” Reed keeps up with Johnson’s physique by doing the same workout and diet as Johnson. “He is right there with me, shoulder to shoulder,” says Johnson. “Training just as hard, just as committed, just as disciplined.”

Johnson (49) and Reed (47) have worked on films such as Disney’s live-action Jungle Cruise, Netflix’s Red Notice, and the upcoming DC superhero film Black Adam (July  29, 2022). Reed has taken plenty of falls and punches over the years, with broken bones, and even survived a stunt injury that nearly ended his career. And while most stars have multiple stuntmen, finding a professional stuntman to match up with Johnson’s build is a challenge. Johnson has recently brought on a backup double, Myles Humphus, to help with his and Reed’s busy schedule.

Writer-director Rawson Marshall Thurber calls Tanoai Reed “the greatest living stuntman.” It’s no surprise that congrats are in order for Reed’s relentless commitment and passion as he is deemed The Hollywood Reporter’s Stuntperson of the Year.

Have you spotted the talented stunt double, Tanoai Reed in any of Dwayne Johnson’s films?