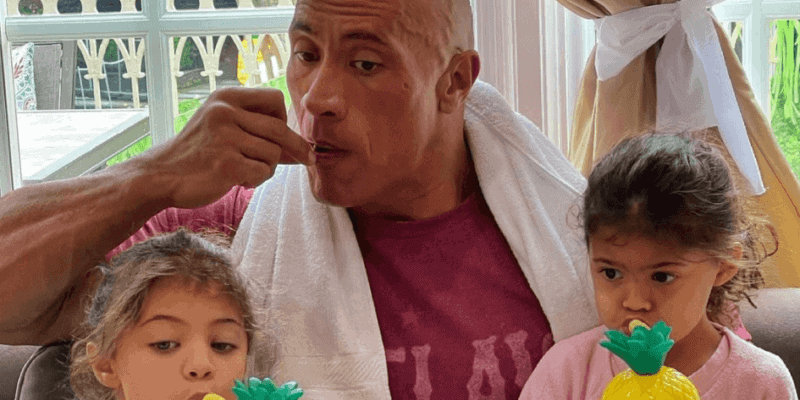 Let’s talk about a Disney fan favorite, shall we? Yes, Dwayne Johnson, of course! Dwayne Johnson (AKA “The Rock”) was a professional wrestler that turned actor and now finds himself as one of the most popular celebrities and entrepreneurs around. Dwayne’s role in Moana as the voice of Maui, along with his role as Skipper Frank in Disney’s live-action Jungle Cruise film has placed him as a beloved actor among Disney fans. Most recently, Dwayne has even discussed a 2024 United States Presidential run. But, on his most recent interview, Johnson sat down and discussed his morning routine which consists of listening to this very unexpected Disney soundtrack.

RELATED: Dwayne Johnson Opens Up On Being a Broke Thief

We all have our morning routines, right? Get up. Get dressed. Get the kids up. Feed them… then hurry them off to school. What do you listen to on your morning drive? Well, for Dwayne, it’s a Disney soundtrack that his daughters simply adore.

On November 3, Dwayne sat down with SiriusXM for an interview. He shared details about how his Halloween went with his daughters which still don’t believe he’s an actor. Instead of singing along to Disney’s Moana which their father sang in, the girls choose a Disney soundtrack that Dwayne says he listens to every morning for 21 minutes. Here’s the video below:

That’s right, the Descendants! Disney’s Descendants is a 2015 film that has since become a massive franchise. The first film debuted as a Disney Channel Original Movie with positive reviews and roughly 6.6 million viewers! Since the first film, Descendants has received a short-form series called “Descendants: Wicked World”, along with new films including Descendants 2 (2017), Descendants 3 (2019), and Descendants: The Royal Wedding (2021).

Dwayne says his family is “Descendants out” with the costumes, films, and yes, songs. Every day Dwayne starts his day with 21 minutes of the Descendants soundtrack for his daughters to enjoy!

Do you enjoy the Descendants soundtrack as much as the Johnson family?