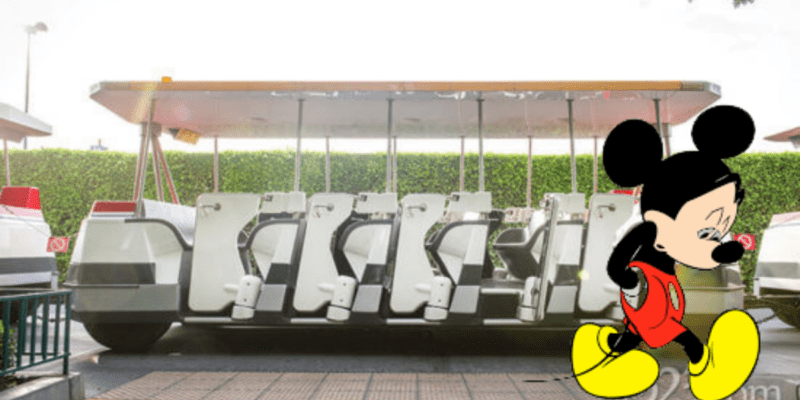 Many Guests’ “first ride of the day” is still missing from the Park experience.

Another week has passed and still the Walt Disney World tram service is not running, leaving Guests more vocal on social media about the beloved transportation’s closure.

Now, Disney has lined the parking trams up in an interesting location, which seemingly teases Guests as they enter the Parks.

It was recently revealed that Disneyland in California will be bringing back the beloved Resort tram service in early 2022, but it appears the trams are still left abandoned at Walt Disney World Resort.

Since the phased reopening from the pandemic closure of Walt Disney World in Florida last year, the parking trams have been notably absent from the theme park experience.

Guests now have to walk from their parking spot at Magic Kingdom, EPCOT, Disney’s Hollywood Studios, and Disney’s Animal Kingdom, which can be very long and arduous from particular areas of the parking lots.

Inside the Magic was at Walt Disney World last week and added many steps to our day with the walk from the Monorail station, under the road bridge, to our car in the Hook parking lot at Magic Kingdom’s Transportation and Ticket Center.

Even at EPCOT and Disney’s Hollywood Studios, the walks were long but also felt largely unsafe with no real specification of where pedestrians should walk alongside the cars entering the parking lots.

The parking trams were in full view of Guests, who then have to walk to the Park entrance once parked:

Additionally, the parking tram signage at Magic Kingdom’s Transportation and Ticket Center is still in place, adding another tease to Guests as they exit the Park after a long day of walking around the Magic Kingdom:

Guests have been vocal on social media yearning for the parking tram return, with many also noticing the lineup of trams on entering the Parks.

Baby Thor Poppins claimed that Disney is “trolling” Guests with the location of the trams:

When we left the Epcot parking lot, we saw trams and Minnie Vans all lined up. At this point, Disney is just trolling us now.

When we left the Epcot parking lot, we saw trams and Minnie Vans all lined up.
At this point, Disney is just trolling us now. pic.twitter.com/SvLS4KjHVF

Stay tuned to Inside the Magic for future news regarding the return of Walt Disney World’s parking trams.

Have you noticed the parking trams on arrival at the Walt Disney World parking lots?