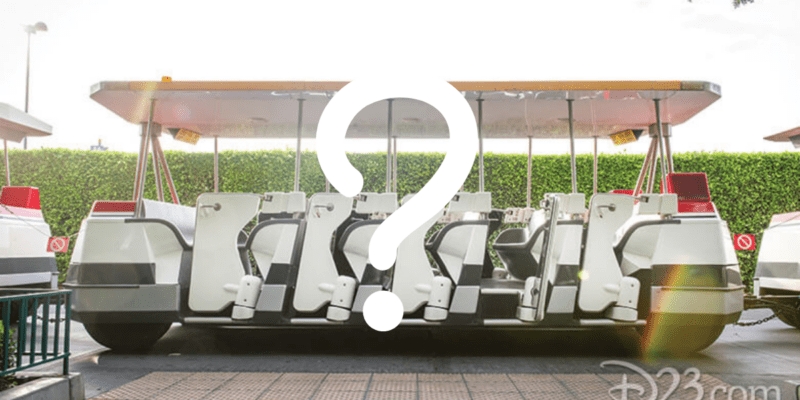 If you’ve been missing the below spiel…

Driver, you are clear. **Tram begins moving** Please hold on to hats, glasses, or any loose items that may fall from the tram. If an article should fall, please stay seated until the next stop, and inform the nearest cast member.

…then you’re part of a large group of Disney fans who continue to ask the same question: when will Disneyland bring back the parking trams?

Social media is rife with Disney fans complaining about the walk, but there doesn’t look to be any remarkable news coming soon.

According to local Southern California news source The OC Register, Disneyland officials are still evaluating the return tram service as part of the phased reopening of the Disneyland Resort.

Visitors to the Disneyland Resort are currently greeted with a two-thirds of a mile walk along the tram route between the parking garages and the entrances of Disneyland and Disney California Adventure. The tram route is about the same length as the distance from the Disneyland front gate to the back of the Park in Star Wars: Galaxy’s Edge.

Right now, there’s no indication as to when this added exhaustion will end — or even if the trams will be brought back in the near or distant future.

Per The OC Register, Disney officials did not elaborate as to the reason behind the prolonged shutdown of the Disneyland parking tram, but it is the first type of acknowledgement from officials concerning the trams not running.

Back in August, Walt Disney World released job openings for a Parking Operations Cast Member, so here’s opening there’s some news soon about the return of Guests’ “first ride of the day”. However, just like at the California Disney Parks, the Florida Disney Parks have not offered parking lot tram transportation since they reopened. Walt Disney World Resort reopened its theme parks in July 2020.

What do you think about the Disneyland trams still not running? Have you been walking the dreaded tram route? Let us know what you think.