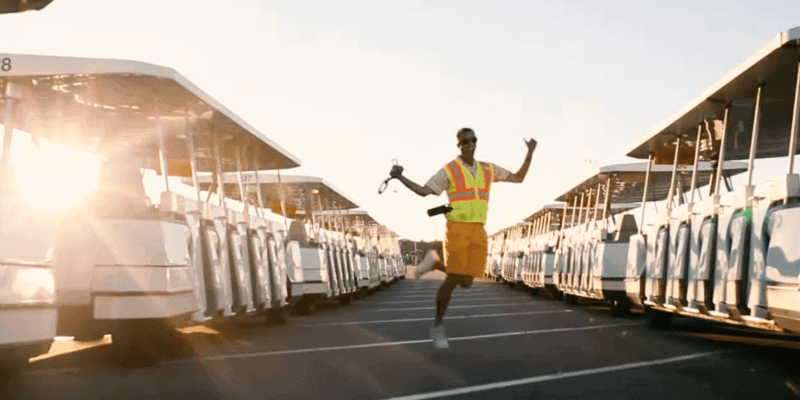 If you’ve been missing the below spiel…

Driver, you are clear. **Tram begins moving** Please hold on to hats, glasses, or any loose items that may fall from the tram. If an article should fall, please stay seated until the next stop, and inform the nearest cast member.

…then we finally have some fantastic news. Disneyland has revealed the tram service WILL be returning to the California theme park resort soon.

Social media is rife with Disney fans complaining about the walk, with Guests posting photos of the abandoned trams in the parking garage.

According to local Southern California news source The OC Register, Disneyland officials have revealed the tram service will be returning in early 2022 as part of the phased reopening of the Disneyland resort.

The treasured tram service will resume between the Mickey and Friends and Pixar Pals parking garages and the front gates of Disneyland and Disney California Adventure.

According to the O.C. Register:

“Disneyland continues to slowly add capacity and make operational adjustments during the phased reopening of the resort, according to Disneyland officials. The Anaheim theme park will conduct maintenance on the parking trams and rehire staff during the next few months.”

Looks like we finally won’t have to huff and puff along the two-thirds of a mile walk along the tram route between the parking garages and the entrances of Disneyland and Disney California Adventure. The tram route is about the same length as the distance from the Disneyland front gate to the back of the Park in Star Wars: Galaxy’s Edge.

News on the return to trams to Walt Disney World Resort in Florida has yet to be announced. Another form of transportation — the Disneyland Monorail — reopened in mid-October. The Toy Story surface parking lot reopened in June with bus service to and from the parks.

Are you excited to see the tram service return to Disneyland? Let us know in the comments.