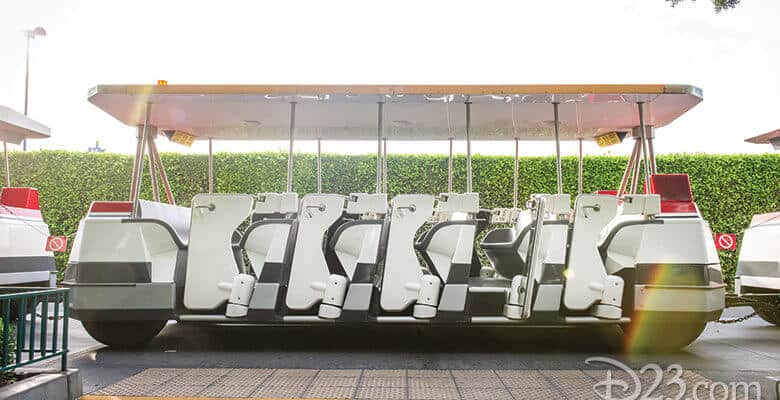 Another week has passed and still the Disneyland tram service is not running, leaving Guests are getting more vocal on social media about the beloved transportation’s closure.

It was recently revealed that Disneyland officials are still evaluating the return of the beloved Disneyland Resort tram service, but it appears the trams are still left abandoned in the Disneyland parking garage.

Guests are currently faced with a nearly mile-long walk from the parking garages to the front gates of Disneyland Park and Disney California Adventure. And according to local Southern California news source The OC Register, there is no current timeline for when the tram service will come back and once again be Guests’ “first attraction of the day”.

In response to Disneyland Resort’s recent Tweet, a Tweet that on its own has caused divided opinion on social media, one Guest posted a photo of the trams behind a fence:

Disney cages innocent trams, locks them away and keeps them from roaming free #FreeTheTrams

disney cages innocent trams, locks them away and keeps them from roaming free. #FreeTheTrams pic.twitter.com/0EHvMe4qFT

The photo shows multiple trams behind a barrier in what appears to be an area of the Disneyland parking structure area. Last week, the popular Disneyland Monorail reopened leaving Guests hopeful for the tram’s return, but this image doesn’t show any movement of the trams.

It does, however, prove Disneyland still has the trams at hand for any future return.

At least @UniStudios has a working tram, @Disneyland

At least @UniStudios has a working tram, @Disneyland.

Pre-pandemic, the Disneyland trams would usually bring park-goers from the Mickey & Friends and Pixar Pals parking garages to a drop-off and pick-up location located adjacent to the Disneyland Explanade.

The Downtown Disney District reopened last summer following a long closure, and the Simba parking lot with it. Later in March 2021, when A Touch of Disney began its limited-time offering at Disney California Adventure Park (over a month before Disneyland Resort would officially reopen Disneyland Park and Disney California Adventure Park on April 30), the Mickey & Friends parking structure reopened to the public. But since then, the trams have still not been running.

Back in August, Walt Disney World released job openings for a Parking Operations Cast Member. However, just like at the California Disney Parks, the Florida Disney Resort has not offered parking lot tram transportation since they reopened. Walt Disney World Resort reopened its theme parks in July 2020.

Keep looking on Inside the Magic for any updates on the return of the Disney tram service.

What do you think about the tram service still not running? Are you exhausted by the current walk to the Parks?