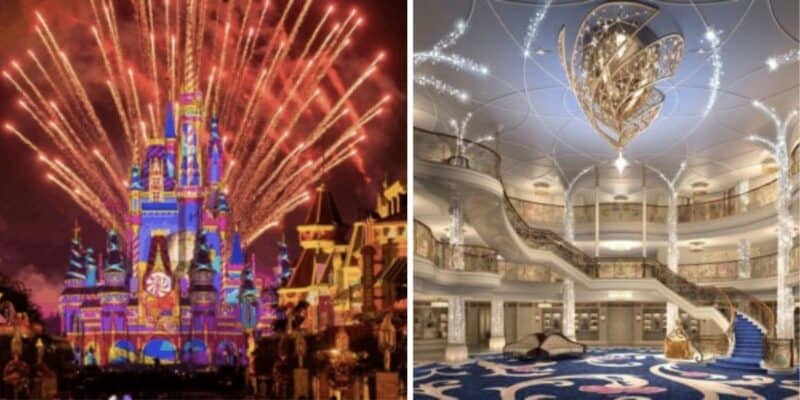 As the he fifth and newest ship in the Disney Cruise Line Fleet, the Disney Wish prepares to make its grand debut in summer 2022. Guests cannot wait to get back to sea on Disney’s newest ship.

We have been learning so much about the Disney Wish as time has gone on, and now that we will soon see a parade version of the ship in the Macy’s Thanksgiving Day Parade, the desire to go to Castaway Cay is only growing. Today, at Destination D23, we have only continued to learn more about the ship and what is to come. Interestingly, it seems that the Disney Wish has a connection to Magic Kingdom!

The Disney Wish is said to be the ship that brings a castle to the sea, and with such a strong Cinderella theme in the atrium, including a chandelier that is shaped to mimic Cinderella’s royal dress change, thinking that this “castle on the sea” is meant to be Cinderella’s, is easy to imagine. On top of that, we also have just discovered that the Disney Wish was meant to be Disney Enchantment. The ship’s name changed; however, Disney was able to ensure that the name Enchantment still went to a castle.

At Magic Kingdom, Disney debuted the new firework show, Disney Enchantment, on October 1 for the 50th anniversary celebrations! Now, we know exactly where that name came from. Even though the ship is not named Enchantment, Disney has made it clear that that is the theme of the ship. By seeing the theme carried from a Disney Park to the DCL unifies the message for Guests boarding.

The Disney Wish will be incredibly innovative and filled with magic from the first-of-its-kind AquaMouse, a Disney attraction at sea, to fantastic dining opportunities for the whole family (including restaurants themed to Frozen and Marvel, and even a Star Wars lounge for adults!), as we have reported in the past.

You will be greeted by Captain Minnie and Mickey Mouse, as well as teaming up with Moana to navigate their canoes beyond the reef, helping Tiana cook up the perfect pot of her father’s favorite gumbo, summoning Tinker Bell to give the Disney Wish an extra dash of pixie dust and diving into the East Australian Current (EAC) with Nemo and friends. Plus, so much more!

We also recently learned that Disney Wish will debut two new shows — Disney Seas the Adventure, featuring Captain Minnie, and Disney The Little Mermaid, a modern and innovative take on a young girl learning the power of her voice.

At the moment, all Disney Cruise Line Guests five and older must be fully vaccinated to board the ship.

What do you think of this unified theme of Enchantment? Let us know in the comments below!