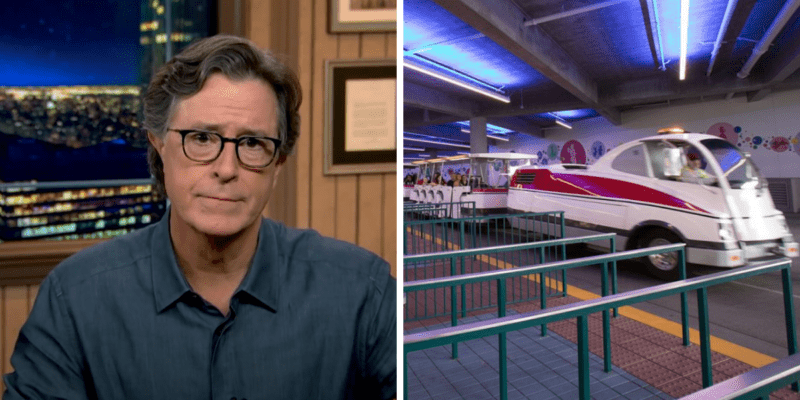 The ongoing closure of the tram service at both Disneyland Resort and Walt Disney World Resort has left Guests feeling quite “tram-atic” lately.

Social media is rife with Disney fans complaining about the walk, with Guests posting photos of the abandoned trams in the parking garages.

Though Disneyland has revealed the parking trams will be returning to the California theme park resort in 2022, Guests and Disney fans alike are still baffled by the tram service’s continued closure.

Now, it looks like television personalities are chiming into the debate, with Stephen Colbert, comedian and host of The Late Show, recently calling out Disney for the closure of the trams.

The two-thirds of a mile walk along the tram route between the parking garages and the entrances of Disneyland and Disney California Adventure has caused much debate among fans. The tram route is about the same length as the distance from the Disneyland front gate to the back of the Park in Star Wars: Galaxy’s Edge.

Stephen Colbert made a dig at Disney Parks during a short segment about the effect of COVID on the service economy. He specifically noted the fact that Walt Disney World reopened more than a year ago, but the free parking lot tram service has yet to resume.

Colbert noted the huffing and puffing of Guests who have had to walk long distances from the parking garages and lots to reach the theme park entrances.

He jokes in the segment below that Disney has turned the parking lot walk into an attraction called “Simba’s Boiling Asphalt Stroll.”

“For example, even though Disney World has been reopened for months, they have yet to restart their parking lot tram services, forcing visitors to walk nearly a mile to enter the Parks. Of course, this being said they’ve rebranded it ‘Simba’s Boiling Asphalt Stroll’.”

You can watch the segment from The Late Show below:

News on the return to trams to Walt Disney World Resort in Florida has yet to be announced. Another form of transportation — the Disneyland Monorail — reopened in mid-October. The Toy Story surface parking lot reopened in June with bus service to and from the parks.

Do you agree with Stephen Colbert? Let us know in the comments.