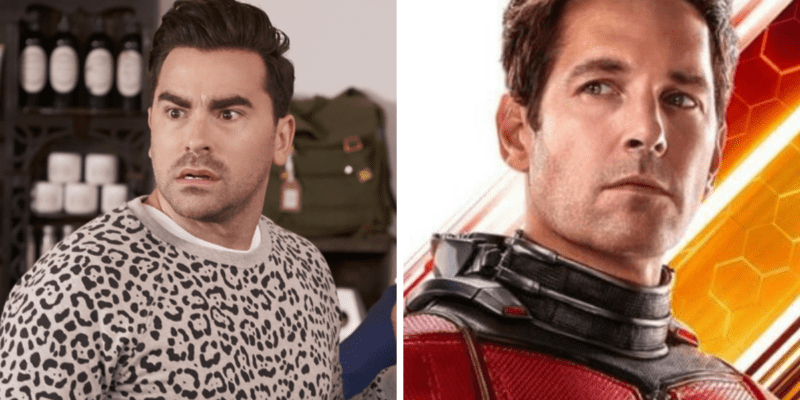 Marvel Studios has numerous eagerly-awaited movies coming up in Phase Four, including Eternals (2021), Spider-Man: No Way Home (2021), and of course, Ant-Man and the Wasp: Quantumania (2023).

Back in August, Marvel fans speculated that Schitt’s Creek actor and creator Dan Levy was joining the cast of the upcoming Ant-Man sequel starring Paul Rudd.

In August of this year, a photo on Twitter went viral showing Dan Levy and Paul Rudd having dinner together in London, where Ant-Man and the Wasp: Quantumania was filming at the time.

The two actors together at a restaurant sparked a social media frenzy of speculation that Schitt’s Creek‘s Dan Levy was starring in the third Ant-Man movie.

Since then, Dan Levy, who plays the popular character David Rose in the comedy sitcom, has been quiet on the matter. But on Jimmy Kimmel this week, he got the opportunity to set everything straight.

Asma Khan posted the photo to Twitter back in July, showing the two actors eating at her London restaurant Darjeeling Express:

When Paul Rudd returns to your restaurant and brings Dan Levy with him!!!

When Paul Rudd returns to your restaurant and brings Dan Levy with him!!! pic.twitter.com/pkRtnF9pDt

Schitt’s Creek and Marvel fans alike had multiple questions (as did we at Inside the Magic!). When did Dan and Paul become friends? Why didn’t Paul Rudd make an appearance in Schitt’s Creek? And the main question: would the Schitt’s Creek writer be starring in the new Ant-Man movie?

During his appearance on Jimmy Kimmel Live, Levy finally got the opportunity to address these rumors. After seeing the photo again, Levy reacted in perfect comedic fashion and explained the story of that viral London night:

The downside of having dinner with Paul Rudd is that the internet, in this case, went wild with a conversation that included: Paul Rudd looks so much younger than Dan Levy, they must be best friends, and Dan is in talks to be in Ant-Man. And the answer is: I wish I was best friends with him, not true, not in Ant-Man, and he also looks much younger than me. So it’s kind of a lose-lose, other than the fact that you’re having dinner with Paul Rudd, which is a win-win.

Of course, Marvel fans know not to trust anything they hear from actors, especially when they deny speculation of their casting in a future MCU movie.

We’ve already heard Tatiana Maslany claim she wasn’t She-Hulk, Benedict Cumberbatch deny being Doctor Strange, and even Paul Rudd brush off rumors of starring in the titular role as Ant-Man.

Bill Murray recently confirmed his appearance in the third Ant-Man film after months of rumors, so though Levy denies his involvement now, there’s still time for a Schitt’s Creek surprise in 2023.

More on Ant-Man and the Wasp: Quantumania

Ant-Man and the Wasp: Quantumania is the third entry in the Ant-Man franchise and sees director Peyton Reed return with a script by Rick and Morty writer Jeff Loveness. Paul Rudd and Evangeline Lilly reprise their role as Scott Lang/Ant-Man and Hope van Dyne/Wasp and will be joined by Jonathan Majors as the lead villain, the time-traveling Kang the Conqueror.

Do you think Dan Levy would make a great addition to the MCU? Let us know!