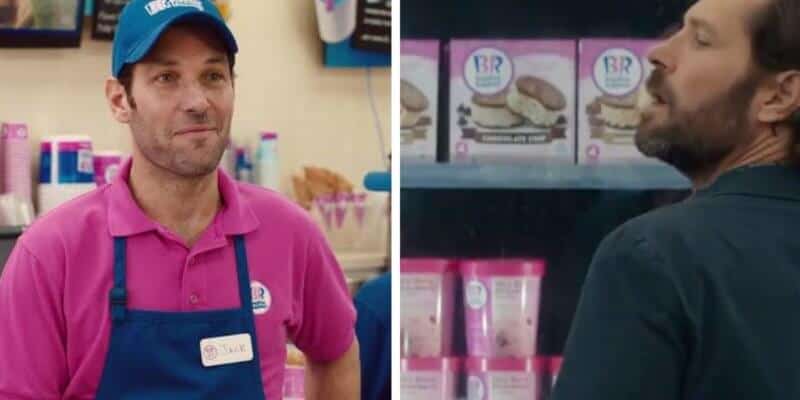 It just so happens that Marvel Avenger Paul Rudd, who plays Scott Lang AKA Ant-Man seems to be the creator of this new universe. If you remember the film Ant-Man, you may remember that when Lang leaves prison, he has a tough time finding a job. He ends up scoring a position at Baskin-Robbins serving 31 flavors of ice cream, even though he clearly is not a huge fan of the job. Fun fact — originally, Rudd’s character Lang was meant to work at a Chipotle, but that ended up falling through so Baskin-Robbins was chosen instead!

Related: REVIEW: “Ghostbusters” is the reboot we all deserve

Now, if we look at Rudd’s next big-budget Sony feature Ghostbusters: Afterlife, a newly released clip of the film shows Paul Rudd shopping for Baskin-Robbins ice cream, and fans are going wild!

Shiv (@A24YOUSSEF) posted a photo of Rudd both working and purchasing Baskin-Robbins from both films noting:

Even in another universe, Paul Rudd can’t escape Baskin Robbins without disasterous effects.

Is Paul Rudd sponsored by Baskin-Robbins?

Between this and Ant-Man, is it in Paul Rudd’s contract to have Baskin Robbins in a film?

Between this and Ant-Man, is it in Paul Rudd’s contract to have Baskin Robbins in a film? https://t.co/QQOJKaGLu9

When Rudd grabs the ice cream in the trailer, the visuals and of the full window of Baskin-Robbins ice cream and time spent on the frame does kind of seem like this may have been product placement, but even it if was, that would typically be something the company pays for. Heck, if I owned Baskin-Robbins, I too would create a trend where Paul Rudd eats it in every movie!

That being said, these are just theories and no correlation between Rudd and Robbins has been confirmed by Marvel or Sony…. but c’mon we had to share this awesome ice cream connection!

If you want to check out the trailer for Ghostbusters: Afterlife, you can watch it below:

Marvel Studio’s next installment in the Ant-Man franchise is on track for a 2022 release, as confirmed by director Peyton Reed.

Now, we just need Rudd to make 29 more Baskin-Robbins cameo movies to complete the BRCU, and then, he will achieve the Gold Medal Ribbon. Perhaps he can invite Captain America, and bring back Tony Stark AKA Iron Man to help!

Do you think there is any correlation between Paul Rudd and Baskin-Robbins?