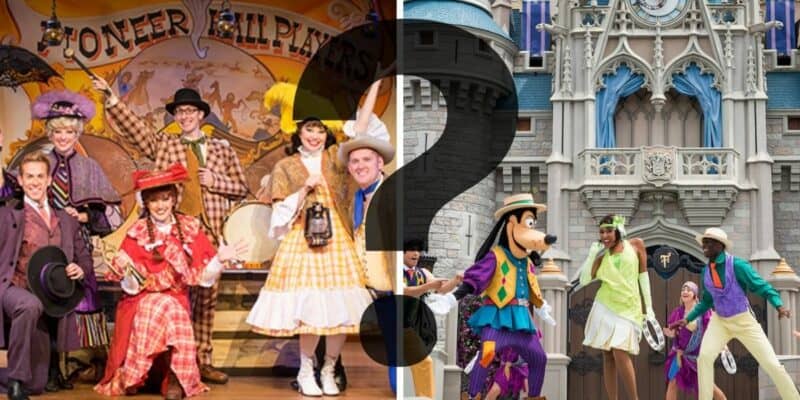 As we continue to move forward amidst the ongoing pandemic, Disney World is continuing to modify its safety and health protocols as well as bring select entertainment offerings back, including the Tam Tam Drummers in Disney’s Animal Kingdom, some Disney character meet and greet spots, and more.

This news comes after Disney announced they will continue to bring back more entertainment in the future after the unfortunate layoffs that took place last year due to the ongoing pandemic.

We have also seen the return of entertainment offerings earlier this year including  Beauty and the Beast – Live on Stage, The Festival of the Lion King — currently operating as a slightly modified version and called A Celebration of the Festival of the Lion King — at Disney’s Animal Kingdom as well as For the First Time in Forever: A Frozen Sing-Along Celebration at Disney’s Hollywood Studios.

With all of this being said, we wanted to know what other offerings Guests are missing at the Parks right now, and let’s just say, our Inside the Magic audience did not hold back sharing their opinions.

A majority of our audience wants to see the Disney Dining Plan return, which Disney previously confirmed would make a comeback, we just do not have an exact date. But in regards to entertainment offerings, here is what a majority of our Inside the Magic audience said they miss most.

Disney describes this show as:

Due to the ongoing pandemic, Pioneer Hall has not been able to host Guests and in fall 2020, the cast of Hoop-Dee-Doo, were, unfortunately, laid off. At this time, we do not have a return date for Hoop-Dee-Doo, but Inside the Magic will continue to update you as we get information.

The other offering that our ITM audience really misses is full parades, specifically the Festival of Fantasy Parade.

Disney World describes the Festival of Fantasy Parade as:

Be a part of this grand gala, with spectacular, state-of-the-art floats starring some of your favorite Disney Characters, colorfully costumed performers on stilts, pendulums and swings—and even a fire-breathing dragon. It’s a festival of fun for everyone!

Currently, Disney has not made any indication that full parades will come back to the theme parks any time soon as they are continuing to show cavalcades throughout the day.

One of the most popular entertainment shows is Mickey’s Royal Friendship Faire — which used to take place daily in front of Cinderella Castle at Magic Kingdom prior to the current pandemic. And this was yet another one of the things our Inside the Magic audience really misses at Walt Disney World.

In case you have never seen this Cinderella Castle stage show, the official description reads:

Although Disney World continues bringing back entertainment offerings, it is clear there are still many things that Guests are missing at the theme parks. Inside the Magic will continue to update you as we get information regarding any Disney Parks news.

What do you miss the most at Walt Disney World? Let us know in the comments below.