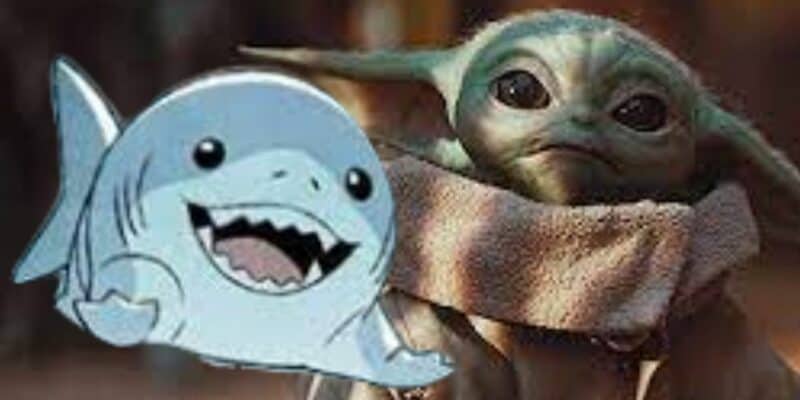 The internet just loves a cute character. Fans swooned when Baby Groot came into their hearts at the end of Guardians of the Galaxy (2014). And when Star Wars’ The Mandalorian changed the game with Grogu (AKA “Baby Yoda”) fans turned their focus to bounty hunter Din Djarin’s (Pedro Pascal) sweet companion.

But Marvel Comics is trying to steal that attention back with their latest creation – Jeff the Land Shark.

When Marvel Comics launched its new line of Infinity Comics designed to be read specifically on their phone they gave away the first issue of the new X-Men Unlimited Infinity Comic by Johnathon Hickman and they clearly expected the Wolverine/ Logan story to be the face of their new line.

The internet had other ideas as everyone focuses on another new Infinity Comic – It’s Jeff! by Kelly Thompson. The cute and lovable new addition quickly became all anyone wanted to talk about it. And how could they not with that sweet face?

The Land Sharks were created by B.R.O.D.O.K., (Bio-Robotic Organism Designed Overwhelmingly for Kissing) a truly bizarre clone of the villain M.O.D.O.K. (Mental Organism Designed Only for Killing), who you might know from his recent Hulu series where he is voiced by Patton Oswalt (Ratatouille, Agents of SHIELD).

After the battle, Gwenpool adopted a baby land shark and named him Jeff. Gwenpool came from a universe like ours and like Deadpool (Wade Wilson) she is completely aware that she now lives in a comic book. She can use this awareness to bring things in and out of the Gutter Space, the dimension that exists in between comic book panels.

However, when her run on West Coast Avengers came to an end, she was worried Jeff the Land Shark would be lost so she gave him to Deadpool. Deadpool has been taking care of the lovable pet ever since.

Though he was briefly overtaken by a symbiote monster nightmare in King In Black, he is back to his normal cute self and is finally the star of the show. And Marvel fans could not be happier.

I just learned about Marvel’s Jeff the Land Shark comic and now I’m ready to lay down my entire life for this sweet boy pic.twitter.com/P6AacgDGpO

Related: Muppet Creator and Yoda Actor Frank Oz Wants Back In But “Disney Doesn’t Want Me”

The first issue took Jeff to the pool where despite being nothing but cute and friendly, poor Jeff the Land Sharks scares his fellow Marvel characters to shore. It all worked out in the end as Jeff can charm anyone.

Not to sound dramatic but I would die for Jeff the Land Shark pic.twitter.com/JbWyFpHBtK

Grogu’s competition for the cutest character is certainly heating up. Too bad there is not much in the way of merchandise for the new cute character. The only official thing you can buy at the moment is the Marvel Legends figure of Shiklah (Deadpool’s Wife) which happens to come with a mini-Jeff. Jack Fisher declared on Twitter that:

If Jeff The Land Shark shows up in the MCU, he’ll be more popular than Baby Yoda. Of this, I am confident.

If Jeff The Land Shark shows up in the MCU, he’ll be more popular than Baby Yoda. Of this, I am confident.

Hopefully, Jeff can make it to the big screen soon. Deadpool 3 is in the works as part of Marvel’s Phase 4. The first R-rated MCU movie starring Ryan Reynolds as the Merc with a Mouth is rumored to be coming on October 7, 2023. And there is also an animated Deadpool series in the works where Jeff would fit perfectly.

Let us know in the comments if you love Jeff the Land Shark too.