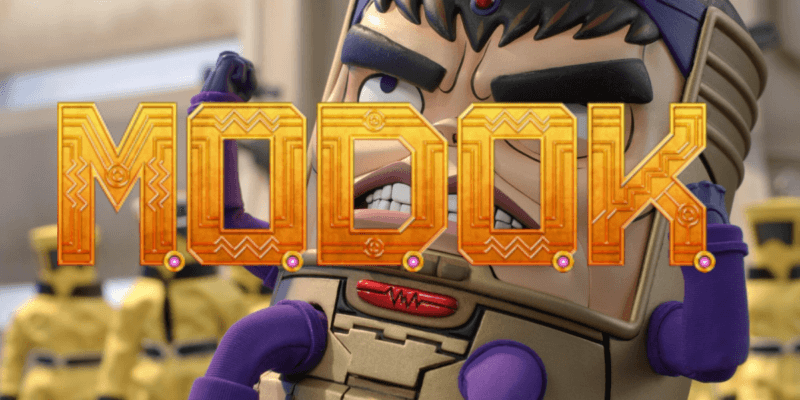 Marvel Studio’s latest series MODOK dropped the entire series on Hulu this Friday and what was set to be a forgettable entry in Marvel Television history has fans rejoicing on a new, fresh take on the superhero genre.

Created by Stan Lee and Jack Kirby, MODOK or the Mental Organism Designed Only For Killing, leads the villainous organization known as AIM (Advanced Idea Mechanics) which brings together evil scientists from across the Marvel Universe against Earth’s Mightiest Heroes.

MCU fans may recognize AIM from Iron Man 3 (2013). Iron Man/ Tony Stark (Robert Downing Jr.) faced off against AIM and Aldrich Killian while dealing with his traumatic experiences in Avengers (2012). But Hulu’s MODOK has a far different and significantly more humorous take on AIM and while it may not be appropriate for children – it is rated R – it’s definitely worth checking out.

Don’t worry, there are no spoilers ahead.

The official description from the series from Marvel is:

In “Marvel’s M.O.D.O.K.,” the megalomaniacal supervillain M.O.D.O.K. has long pursued his dream of one day conquering the world. But after years of setbacks and failures fighting the Earth’s mightiest heroes, M.O.D.O.K. has run his evil organization A.I.M. into the ground. Ousted as A.I.M.’s leader, while also dealing with his crumbling marriage and family life, the Mental Organism Designed Only for Killing is set to confront his greatest challenge yet!

But, the premise is not the key to the show’s success. While fans were disappointed with the version of AIM they got in Iron Man 3, a character like MODOK seemed like he would never fit in Kevin Feige’s Marvel Cinematic Universe and his fan base is certainly not the size of a villain like Loki.

It seemed like Marvel did not even have much faith in MODOK, it wasn’t marketed heavily like the other Marvel Television series like WandaVision and The Falcon and The Winter Soldier and wasn’t even brought to Disney’s new streaming service Disney+. The R-Rated series is distinctly different from everything Marvel fans have gotten in a long time.

Written and produced by Jordan Blum (Community) and Patton Oswalt (Ratatouille, Agents of SHIELD) has an amazing cast. Patton Oswalt voices the title character, and he brings his all to the performance and the writing of the show. He even showed up to the recording studio in full cosplay as shared by Jordan Blum:

The motion capture physical performances were long, grueling days but @pattonoswalt made #modok come alive before our eyes. pic.twitter.com/OZTpjX10gF

He is joined by Ben Schwartz (Parks and Rec) as his son Lou, Melissa Fumero (Brooklyn Nine-Nine) as his daughter Melissa and Aimee Garcia (Lucifer) as his estranged wife Jodie. Even the guest cast could not leave fans wants more with names like Jon Hamm, Nathan Fillian, and Whoopie Goldberg.

Even before all the episodes were available for fans to binge-watch, the critics were already celebrating the animated series. It was quickly certified fresh on Rotten Tomatoes. Brian Tallerico from Roger Ebert said:

Marvel’s “M.O.D.O.K”. works because […] it knows heroism and shows about supervillains can still be inherently silly sometimes. It doesn’t take itself overly seriously, and that playfulness has been lacking in almost all superhero culture of the last few years. It’s not perfect. Some of the episodes are more forgettable than others, but it has a consistent cleverness that makes its flaws easy to overlook, especially when the lines are delivered by such talented voice actors. It’s just a fun world to hang out in with talented comedians in every scene

And fans agree. Meerkats R Fully Vaxxed sums it up well saying: “MODOK on Hulu is good. You should totally check it out. Unless you don’t like fun.”

MODOK on Hulu is good. You should totally check it out. Unless you don't like fun.

The show about the Marvel villain facing his midlife crisis and trying to take down heroes like Iron Man has some dark moments, but its take on the egomaniacal supervillain fills a void that Marvel fans didn’t even know they had. Forgotten-HERO adds that “#MODOK is exactly what i was missing in my life i can relate“

Instagram even has its own MODOK filter now, which lets fans come together by imagining themselves as giant-headed evil geniuses in hover chairs. 7Spideycomics on Twitter even celebrates the theme song saying “The MODOK theme slaps for no reason bro.”

The MODOK theme slaps for no reason bro pic.twitter.com/Ng820tJWpf

Have you watched MODOK? What do you think?