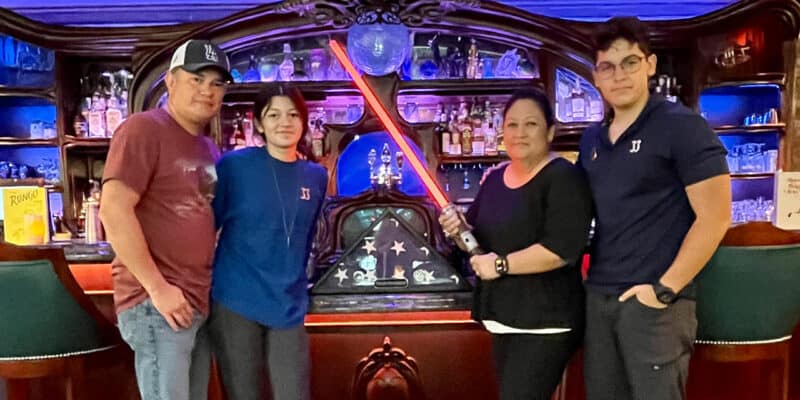 We’ll start at the end of this story when Disneyland Resort Vice President of Security Dan Hughes summed it up for Disney Parks Blog:

“We took the American flag that was flying over Disneyland and quickly had it framed and created a plaque, so we could present it to the family. I said, ‘Your son’s sacrifice means the world to our country and also to us at Disneyland, and it’s our honor to give you this token of our appreciation,’” Dan recounted. “Mrs. Lopez broke down in tears and said, ‘My son loved Disneyland,’ and the whole room got choked up.”

The son in this story is 22-year-old Marine Cpl. Hunter Lopez, who tragically lost his life on August 26, 2021 during the attack at the Kabul airport in Afghanistan. Lopez, a passionate Disneyland and Star Wars fan, was one of 13 U.S. service members killed during the attack.

Before Lopez’s family was spontaneously presented with the Disneyland Resort flag in his memory, they had come to the theme park for another reason — to make a lightsaber to bury with their son. Savi’s Workshop at Disneyland Park’s Star Wars: Galaxy’s Edge land allows Guests to create custom, handbuilt lightsabers they can cherish for years to come.

Lopez, who at 5-years-old had “asked if he could name the baby [his little brother, Owen] “Uncle Owen” after the Star Wars character Owen Lars [Joel Edgerton]”, was a lifelong fan of a galaxy far, far away, and he had finally gotten the chance to construct his own Jedi weapon in November 2019.

Before Lopez deployed, he told his parents he wanted to be buried with his beloved lightsaber by his side.

His parents intended to honor Hunter’s request, “but I just couldn’t find the courage to part with the lightsaber he built,” Mrs. Lopez said through tears. So the Lopezes, along with their 18-year-old son and 17-year-old daughter — just six days after Hunter’s death — drove from their home in Indio to build a replica of the lightsaber Hunter had created in Savi’s Workshop in Star Wars: Galaxy’s Edge. And this one, built by his entire family, would be buried with him.

After Lopez’s family, including his 18-year-old brother, Owen, and his 17-year-old sister, built the lightsaber that would be laid to rest with the Marine, they got the chance to visit Club 33, where Cast Members had lined up 13 glasses of champagne, one for each of the fallen U.S. soldiers.

“Disneyland is all about celebration and happiness, so it’s not often that we see or hear this in our work. But in this divisive world, when we can all come together and support something so meaningful, it’s a reminder of how much pride our cast can take in what this place means to people.”

The ITM team sends our sincerest condolences to the Lopez family, and the families of the other fallen soldiers from the Kabul airport attack, during this especially challenging time.