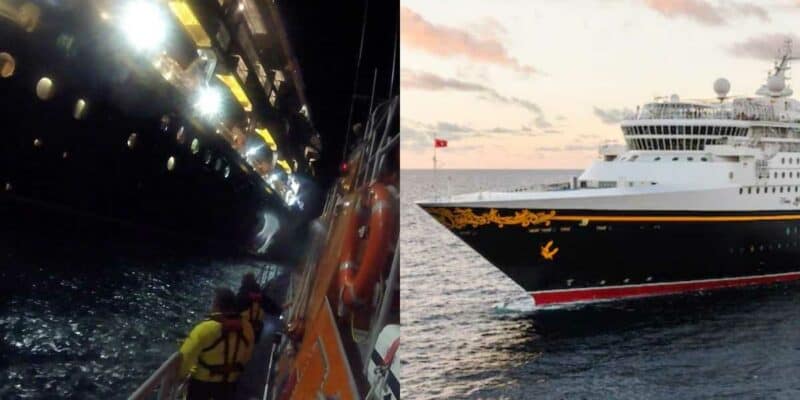 Any type of Disney vacation should be joyful and memorable, but for one Guest aboard the Disney Cruise Line, their trip on the high seas was cut short when they had to be medically evacuated after sustaining an injury.

One Guest aboard the Disney Magic cruise ship — the cruises currently operating “staycations” off of the coast of the United Kingdom — was evacuated by the Royal National Lifeboat Institution (RNLI) after suffering a dislocated shoulder onboard.

The RNLI Tynemouth branch in North Shields, U.K., was called to the scene. They issued a statement regarding the situation via Instagram.

Last night at 20:55 Tynemouth RNLI was called out to the Disney Cruise Ship Magic off the coast of Tynemouth to conduct a casualty transfer. The casualty had dislocated their shoulder while on board and had been treated by the ships doctor.

The social media post goes on to describe the medical situation they encountered when approaching the Disney cruise ship.

Tynemouth’s all weather lifeboat Osier made its way and pulled up on the starboard side of the ship to await the casualty transfer.

Once the casualty was aboard the crew undertook a quick casualty care assesment [sic: assessment] and provided pain relief while we made our short trip back to Tynemouth Lifeboat station. On arrival we were met with @tvlb_search_and_rescue who took the casualty to hospital.

The speedy evacuation of the Guest made sure the Tynemouth lifeboat was available to use shortly after the incident on board the Disney Magic.

The lifeboat was made ready for service again at 21:45.

Remember if you need any assistance call 999 and ask for the coastguard.

The Disney Cruise Line is currently operating the Disney Magic at Sea summer “staycations” in the United Kingdom. Meanwhile, the cruise ship fleet has once again begun embarking from the U.S. after a series of test cruises over the past few months.

If you are hoping to take a Disney Cruise Line vacation, be sure to check the current health and safety requirements regarding the operation of the ships, and the sailing vaccine requirements. You can find the official Disney information here.

More on the Disney Magic

Created with your entire family in mind, the Disney Magic combines classic nostalgia and modern amenities with Disney’s signature service. Step aboard for spacious staterooms that ensure everyone’s comfort. Get lost in original Broadway-quality entertainment. Indulge in first-rate dining. From bow to stern, set sail for unforgettable storytelling that only Disney could bring to life.

Disney Magic joins Disney Fantasy, Disney Wonder, and Disney Dream as part of the Disney fleet. The ships will be joined by the brand-new Disney Wish next summer. As well as the usual Disney characters, the newest ship will feature theming like the Star Wars Hyperspace Lounge, and Frozen and Marvel dining experiences. The Wish‘s maiden voyage will happen sometime in summer 2022, when, hopefully, the cruise industry is fully back in operation.

Inside the Magic will update this story whenever new information becomes available.