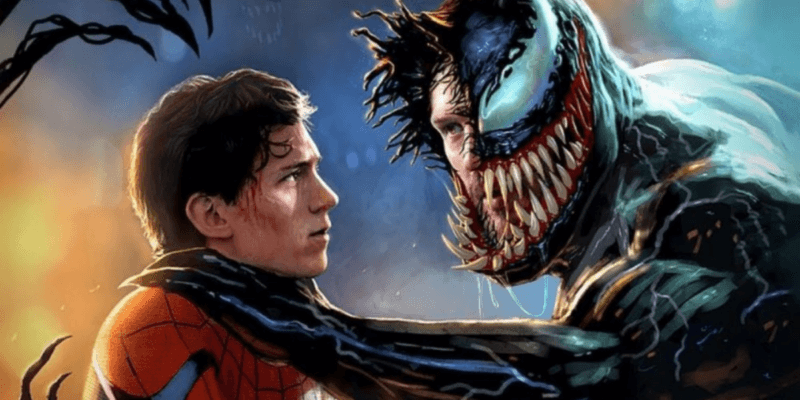 Tom Hardy says he is on board for an official Marvel Cinematic Universe crossover between his enigmatic Venom character and Tom Holland’s Spider-Man.

Related: Spider-Man vs. Venom Movie Reportedly In the Works

The Marvel Universe is exploding with the original series Loki, and What If…? on Disney+ shaking up thing, and with four Marvel movies coming out this year, Marvel fans are ready for Phase 4.

Tom Holland’s epic Spider-Man journey is sadly coming to a close with Spider-Man: No Way Home, the sixth and final MCU film in his Disney-Sony deal.

On the other side of the pond sits Marvel’s Venom, played by The Dark Knight Rises (2012) and Inception (2010) star Tom Hardy. Venom (2018) shocked Marvel fans with its gritty take on the character, but it was true to the Marvel comics, and therefore, true to the character’s essence.

In a recent interview with Esquire, Hardy stated:

“Should both sides be willing, and it be beneficial to both sides, I don’t see why it couldn’t be. I hope and strongly, with both hands, push, eagerly, towards that potential, and would do anything to make that happen, within what’s right in business. But it would be foolish not to head towards the Olympic Games if you were running 100 metres, so yeah! I want to play on that field.”

That’s a definite yes from Tom Hardy on being up for a Marvel’s Spider-Man vs. Venom crossover in the future.

Since’s last October, we’ve heard numerous reports and rumors that Tom Hardy’s Venom could appear in No Way Home. While there’s not going to be any confirmation from Marvel on this epic matter, Hardy’s statement above would serve as a way to throw off fans — much like Paul Bettany’s “special guest” lies for WandaVision.

Due to Tom Holland’s current contract between Sony and Disney and the studios’ split between Spider-Man box office revenue and merchandising rights, Marvel would need to draw up a new contract to ensure this crossover happens.

With the Multiverse — and possibly the Spider-Verse — being featured in No Way Home this December, it’s entirely possible for Eddie Brock to make the jump over to NYC via a time riff or interdimensional portal created by Wanda Maximoff/Scarlett Witch (Elizabeth Olsen) or from Loki (Tom Hiddleston) and fight Peter Parker.

Fans were quick to spot easter eggs relating to Sam Raimi’s Spider-Man trilogy starring Tobey Maguire and even Kevin Feige’s Avenger movies in trailers for Venom: Let There Be Carnage. In the photo above, you can see a detective reading a Daily Bugle newspaper from Tobey Maguire’s Spider-Man universe.

The Marvel characters present in Venom aren’t the same in Maguire’s Spider-Man movies or Tom Holland’s world, but that doesn’t mean they can’t share the same screen in the future with Captain America, Black Panther, Captain Marvel, and Doctor Strange.

Do you want to see a Venom vs. Spider-Man movie? Let us know in the comments below!

Comments Off on Tom Hardy Ready to Face Tom Holland in Spider-Man vs. Venom Crossover