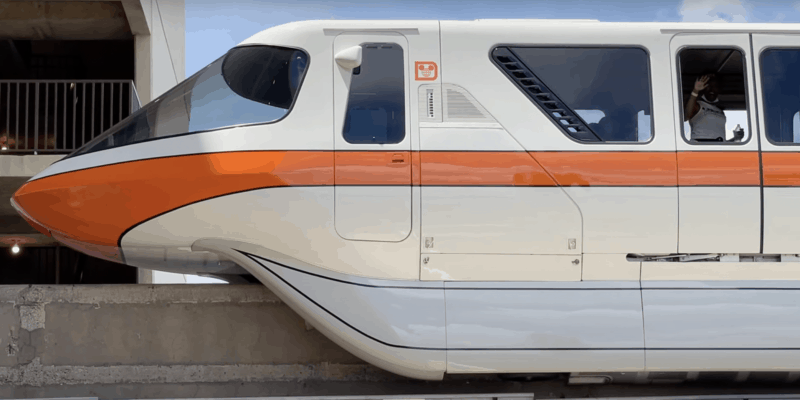 Just after noon on Wednesday, August 18, 2021, the Orange Line Monorail making the Resort loop lost power, stranding Walt Disney World Resort Guests aboard in excruciating 98-degree temperatures. Quickly on scene were the Reedy Creek Fire and Police Departments, but after a short while, the Disney Monorail tow truck arrived for more assistance.

In a video posted by TheCapsTv (below), you can instantly hear sirens wailing and official vehicles arriving on the scene just outside Disney’s Contemporary Resort. The cameraperson doesn’t mention how long the Monorail had been stopped by the time the camera started rolling, but you can see many windows already having been removed and laid on the cabin floor at the direction of Cast Members. When the power goes down on the Disney World Monorail, so does climate control!

Within five minutes of filming, we can see the Reedy Creek cherry picker lining up to rescue Guests if needed, but also the Monorail tow truck zips up the line to assist. You can see the small car-sized tow truck, which takes about six minutes to attach to the “back” of the Orange Line Monorail train.

Eventually, the Reedy Creek fire department begins to put the cherry picker down at the same time the tow truck begins to pull the hefty Monorail backward. We can hear the Cast Member through the open windows tell Guests they are being towed back to the Magic Kingdom Monorail station for disembarkation.

The photo below is a screenshot from TheCapsTV of the tow truck passing by the Tomorrowland side of Magic Kingdom with the monorail in tow. There were no reports of injuries, and Cast Members and officials handled the incident properly.

From TheCapsTV on YouTube, we get a small, personalized description of what happened.

On Wednesday, August 18, 2021 around 1:15 PM monorail orange lost power exiting the contemporary resort on its way to Magic Kingdom. Disney’s Reedy Creek Fire Department was on scene and in charge within minutes. The monorail tow quickly arrived and was able to tow the monorail into the Magic Kingdom station after several minutes.

You can watch the full video below, which was cut and edited for time by the original film team.

Walt Disney World’s Monorail trains are aging rapidly. The 30-year-old cars have been in use since 1989 and are each 203 ft 6 in (62.03 m) long (consisting of six cars) and can carry 360 passengers. The trains are driven by eight 113 horsepower motors which are powered by a 600-volt electrical system running through a busbar mounted on each side of the concrete beam of the monorail track.

It seems as though it was this busbar Monorail beam system that lost power and caused Disney’s Monorail to become stranded. The old Monorail system has been called “too costly” to update; however, it remains a highly utilized transportation system at the Most Magical Place on Earth and so Disney Parks fans have been calling for these updates over other refurbishments.

Many say this is because if the system goes down, it throws the entire Resort into a tizzy. Extra buses need to be stationed rapidly to ferry Guests to the TTC, Monorail Area Resorts, Magic Kingdom Park, and EPCOT.

Disney Guests absolutely love this “attraction” at the Parks and have been known to have a little too much fun with it. Check out this Guest as he hops off at Disney’s Polynesian Village Resort and attempts to hustle and hop back on at Disney’s Grand Floridian Resort and Spa!

Do you enjoy riding the monorail? Have you ever been stuck on Disney transportation? Leave us a comment below!