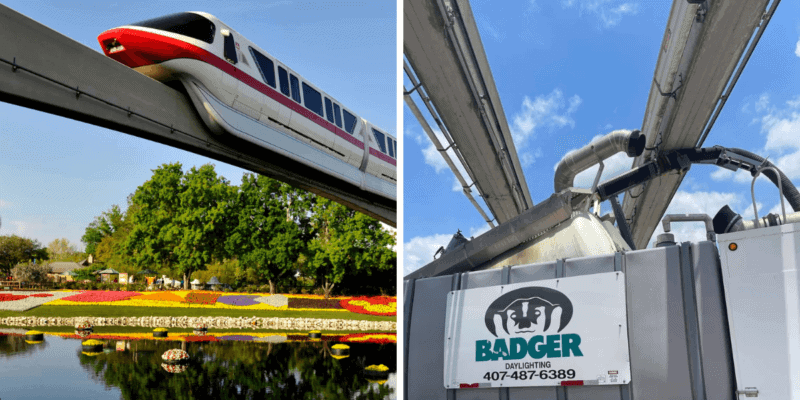 The Walt Disney World Monorail line is experiencing emergency downtime today due to a monorail accident involving a construction truck. This afternoon, on Friday, May 21, 2021, a Badger Daylighting Company construction truck had not lowered its pipeline, causing a collision with the monorail lines around Walt Disney World Resort’s Contemporary Resort. Both the Express Monorail (to the TTC monorail station) and the Resort Monorail are not currently running at the time of this article’s publication.

Colliding with the overhead monorail track where Guests often cross the street from Magic Kingdom to Disney’s Contemporary Resort, the Badger Hydro-vac truck didn’t fully lower its pipeline, causing it to not only crash into the concrete overpass above but also disturb the electrical metal portions of the line.

While there was no monorail train present at the time of the incident, out of precaution, Disney officials shut down the monorail system until everything could be inspected. Crews will be out on the line attempting to conduct further inspections and hopefully start repairs. Disney visitors have reported seeing workers arrive on the scene to respond to the incident. It is not yet known when monorail operation will resume on Disney’s sprawling resort.

While the truck has already been cleared from the location, Twitter user Omar (handle of @OmarRobau) caught photos of the accident from the Magic Kingdom side of the walkway. He posted on his feed today closeup photos of the monorail line being struck (the truck is stopped) by a concrete truck.

@DisneyBums on Twitter also shared photos from the “When the Wheels Come Off” Disney Passholder fan page, teasing the @wdwbusdriver Twitter account of taking a side job today and failing miserably with overhead clearance.

It is inevitable that the Disney Parks Guests staying at the three monorail-accessible Resorts as well as those traveling back to the Ticket and Transportation Center will have to find alternate means of transportation, such as buses, ride-shares, water taxis, or even using the larger Seven Seas Lagoon Ferry Boats.

The Badger Daylighting Construction Co. is a HydroVac Company, building custom and purposefully built hydro-vac vacuum trucks. The “Badger Hydrovacs,” as they are popularly referred to, “use integrated high-pressure water and vacuum systems mounted on a truck chassis to expose buried infrastructure or prepare an area for future work.” according to the company’s website. “Over the course of our 25 years in operation, the ‘Badger Hydrovac’ has gained a venerable reputation in the hydro-excavation category as it has consistently proven itself superior over traditional mechanical excavation.”

Now the company may have to deal with a little flack from the public as well as a potentially costly repair to the treasured Disney Monorail line.

Do you stay at monorail-accessible Resorts at Walt Disney World? Leave us a comment below.